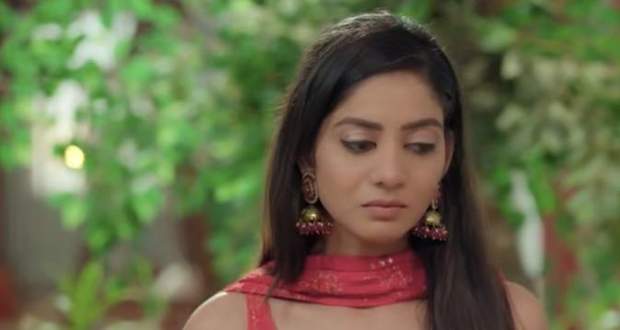 She screams for help and Saloni unlocks the door from the outside.

Telling Sudha to get the lock changed, Bhavna suddenly gets the idea to lock Armaan and Saloni in the same room while Diya is away in her father’s house.

Meanwhile, Sudha feels uneasy to set up Saloni and Armaan with an artificial plan.

She tells Madhu how wrong it is to lock her own son with a woman who is not even his wife.

However, Madhu tells Sudha she is doing nothing wrong as someone ought to think about an heir that can carry Rastogi Family’s legacy.

Sudha agrees with Madhu and says she is doing all this only due to Diya.

Meanwhile, Bhavna tells Saloni that there is going to be a Jaagrata and she should stay home as there should be someone to take care of the house.

Bhavna specially mentions that Armaan is staying too in the house.

Bhavna also informs Armaan to make Saloni eat something as she has not eaten anything after Armaan and Diya left for Brij’s surgery.

Armaan carries a plate of food to Saloni and tells her to eat it.

She refuses and tells Armaan that she does not feel like eating anything but Armaan says if she doesn’t eat, he might have to use a tactic he used to use when they were kids.

Saloni laughs as Armaan hand-feeds her.

However, before Bhavna leaves, she intentionally locks the door and Saloni informs Armaan that this room can only be opened from the outside.

Musing about their childhood days, Armaan says it is time for Saloni to find a groom as Armaan found his best friend, his soulmate, and a perfect partner, all in Diya.

On the other hand, Diya feels uneasy because Armaan does not pick his phone up.

However, Diya’s call gets picked up by Bhavna.

Planting a seed of suspicion in Diya’s mind, Bhavna says that Armaan must have gone outside with Saloni.

The next day, Diya decides to return to her Sasural, greeting both Madhu and Saloni.

However, Diya does not see Armaan in his room and looks for him in the entire house.

Diya then opens the door of Sudha’s room where Saloni and Armaan are sleeping. Armaan’s head is in Saloni’s lap as she sleeps in a sitting posture.

© Copyright tellybest.com, 2022, 2023. All Rights Reserved. Unauthorized use and/or duplication of any material from tellybest.com without written permission is strictly prohibited.
Cached Saved on: Tuesday 22nd of November 2022 02:38:05 AMCached Disp on: Friday 9th of December 2022 06:11:06 PM