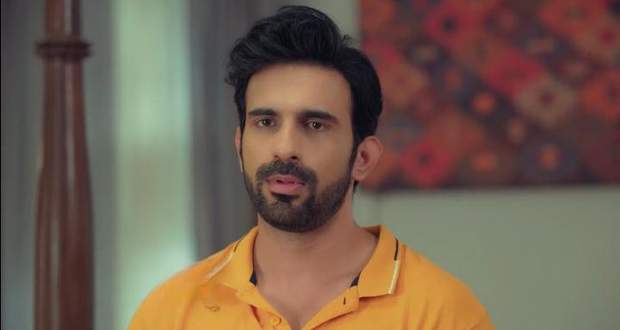 Today's Yeh Jhuki Jhuki Si Nazar 23rd June 2022 episode starts with Palki asking Krish what is he looking at from behind while Krish offers to help Palki in the Kitchen.

Palki takes Krish’s offer and asks him to knead the dough.

Madhu calls Krish while he disconnects the call using his nose but it got connected and Madhu overhears Palki and Krish’s conversation.

Madhu gets angry at Palki and Krish’s closeness and decides to do something about it.

Meanwhile, Armaan and Diya are making a birthday present for Sudha when Sudha comes to Armaan’s room to ask him to get her door fixed.

After a while, Sudha opens a trunk full of children's clothes and thinks of asking something from Saloni instead of Diya on her birthday.

Just then Madhu comes to Sudha and tells her about Krish and Palki’s growing closeness.

At the Mathur house, Brij Mohan asks Palki if she is interested in Krish while Palki tries to lie about it.

On the other hand, Sudha asks Krish about Palki while Krish tells her of them being friends only.

Meanwhile, Sudha gets angry at Madhu for accusing Krish without evidence and tells her that only she will decide who Krish will marry.

Madhu gets very upset at being insulted by Sudha while Bhavna tries to calm her down.

Madhu tells Bhavna that tomorrow she will prove to Sudha about Palki and Krish's affair.

After a while, Diya comes to Krish’s room to ask him his reasons for lying to Sudha about Palki.

Krish tells her about being afraid of Sudha’s anger.

Diya tells him to have the courage to stand for his love and instead of hiding it keep it up front and take the blessing of the elders.

Krish gets inspired by Diya’s words and promises to tell Sudha about it tomorrow.

Later, Sudha comes to apologise to Madhu for losing her temper.

Meanwhile, Krish proposes to Palki on the road in a very romantic style.

Krish also promises to tell Sudha about their relationship tomorrow on her birthday.

At midnight, Arman and Diya come to Sudha’s room to wish her birthday but get surprised to find it empty.

Saloni also has planned a grand surprise for Sudha which pleases her very much.

Later, Arman and Diya share a romantic moment together and dance with each other.