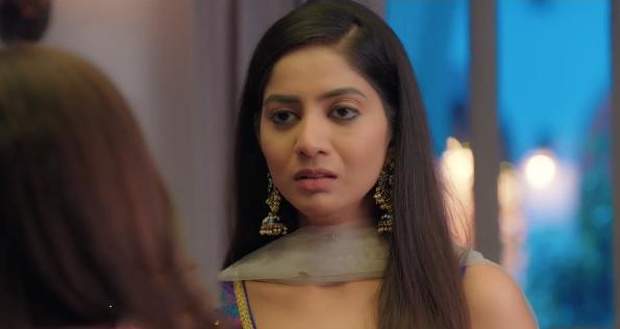 However, Sudha tells Saloni she has a request to make.

Saloni says that Sudha can ask her anything.

Sudha begins and tells Saloni that she has always seen Armaan and her together since childhood and wanted to see them married.

However, due to circumstances, Sudha’s dream never got fulfilled.

On top of this, Sudha also mentions knowing Saloni’s hidden feelings for Armaan.

When Sudha says she wants Saloni to marry Armaan, Saloni gets confused and asks Sudha how could she even think of this as Armaan is already a married man.

The next thing puzzles Saloni even more with Sudha saying she wants Saloni to fulfill her dream of becoming a grandmother.

Meanwhile, Armaan and Diya sway to slow music, hugging each other.

Armaan promises Diya that no third person except their little baby can come in between them.

On the other hand, one part of Saloni’s mind tells her to grab this opportunity and marry Armaan with Sudha’s support.

The other part of Saloni’s mind tells her it is wrong to marry Armaan like this.

The next day, Diya gets upset when Sudha asks Saloni to light the lamp in front of Ladoo Gopal.

When Armaan asks Diya why she looks upset, she says that Sudha hasn’t forgiven her.

On the other hand, Bhavna finds pictures of Palki and Krish together and informs Madhu about it.

With an instant smile, Madhu says that they even have proof now to show it to Sudha.

Likewise, Bhavna knocks on Sudha’s door and keeps the envelope containing their pictures at her doorstep.

However, Sudha is busy on the call. Before breakfast, Armaan sits on his knees and wishes Sudha a happy birthday.

She frowns and tells Armaan her birthday gift would be good with Armaan listening to her as he used to in childhood.

says that it would best to forget and move on but Sudha shuts him in irritation.

Aghast, Sudha feels betrayed when she sees Palki and Krish’s photographs together.

Bhavna and Madhu add fuel to the fire saying ever since Diya entered this house, both of Sudha’s sons have stopped listening to her.