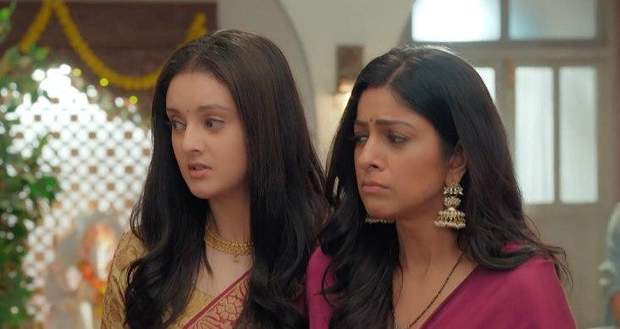 Today's Yeh Jhuki Jhuki Si Nazar 25th June 2022 episode starts with Palki worrying about her look but Brij tells she looks perfect and adds a "Kala Tika", something Anjali would do to save their daughters from the evil eye.

Meanwhile, Sudha finds out about Palki and Krish’s photographs and gets angry.

She calls Palki and asks her to come to Mathur’s.

Sudha says that no one has been listening to her ever since Diya arrived in the house.

When Armaan tries to interject, Sudha shuts him up.

However, Armaan reasons that Krish and Palki are adults and can take decisions for themselves.

Sudha asks what about her happiness since no one is bothered to make Sudha happy.

Palki arrives and Sudha asks her what kind of magic she has done to Krish.

Sudha loudly says that all her sacrifices are for nothing if her own sons do not listen to her anymore.

To make Sudha calm down, Armaan promises to do anything Sudha asks him to.

This gives Sudha an opportunity to tell Armaan to go with Saloni to Jammu but his no reply makes Sudha angrier.

She locks herself in the room and packs her bag.

However, in the rush of panic-stricken adrenaline, Sudha faints on the floor and Diya breaks the glass of Sudha’s door through her hand, bleeding a little.

Giving lemon and sugar mix to Sudha, Diya says that Sudha does not have to go anywhere.

Since Diya and Palki are the roots of the problem, Diya states she will leave the house.

Meanwhile, Madhu and Bhavna look at each other worriedly, saying that one little thing became so big.

Before leaving Diya tells Madhu that she did everything to receive her love but maybe because of some reasons, Madhu was not able to love Diya.

Diya walks up to Bhavna and says she has always regarded her like a little sister.

With tears, Armaan requests Sudha to stop Diya since she will not even listen to Armaan right now.

Bhavna, Madhu, and Saloni tell Sudha that no one can replace Diya and Sudha asks Diya to stop.

Opening her arms, Sudha asks Diya to come in and give her a hug.

She apologizes to Diya and says Diya has always been the mature one while Sudha is still acting like a kid.

Sudha also apologizes to Palki and says she would be the perfect bride for a half-brain like Krish.

Giving Krish’s hand into Palki’s, it is a happy ending for the Rastogi’s at Mathur’s as Palki clicks a family selfie at the end of the drama.

© Copyright tellybest.com, 2022, 2023. All Rights Reserved. Unauthorized use and/or duplication of any material from tellybest.com without written permission is strictly prohibited.
Cached Saved on: Thursday 26th of January 2023 12:11:16 AMCached Disp on: Monday 6th of February 2023 07:31:56 PM