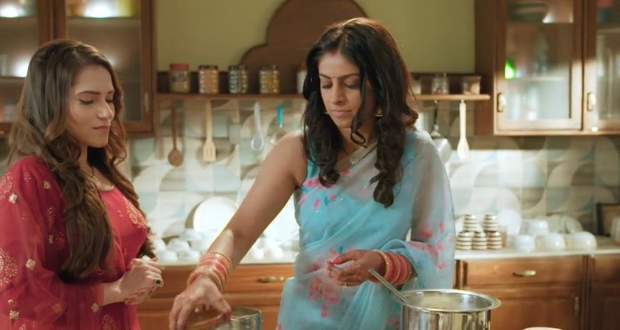 Bhavna cunningly watches Diya create a blunder and add salt to her Kheer instead of sugar but Diya tastes it before adding it to the food.

Diya directly confronts Bhavna and mocks Bhavna's level of plotting as she works in the hotel industry and cannot be fooled.

Bhavna walks away sheepishly and Diya suggests eating almonds to sharpen her brain.

Armaan stops Bhavna to behave in a competitive way and be fair.

As Sudha presents Diya with the diamond earrings, Diya rejects them and asks to bring Ramkali back.

Diya advocates for Ramkali's loyalty and says it is not clear that she was the one who mixed some adulteration in the Haldi while looking at Bhavna.

Later, Sudha agrees to keep Ramkali back while Ramkali tries to state mean comments behind Sudha's back.

Meanwhile, Diya advises Ramkali to talk to Sudha as she was stressed about the wedding and other arrangements.

On the other hand, Bhavna tries to bring Diya's decision in a negative light in front of Sudha and teases her about leaving everything and going to the Himalayas.

Sudha stops Bhawna to speak negatively of Diya as she is the daughter-in-law of the Rastogi house.

Bhawna doesn't stop and continues with her tattles and hints to keep Diya under her control.

Meanwhile, Sudha decides to do something as Diya is going for her Pag Phera ceremony.

Later, Armaan swoons over his wife Diya and appreciates how beautiful Diya looks.

Armaan leans in for a kiss while he tries to fix Diya's bindi and expresses his love.

Meanwhile, Armaan and Diya arrive downstairs while Sudha blesses them with the Aarti.

On the other hand, Bhavna appears with her never-ending taunts directing it toward Diya.

Diya replies with another well-fitted answer for Bhawna while Armaan asks about their sarcastic relationship.

Meanwhile, Sudha explains to Armaan that it is the sisterly love that both Diya and Bhavna share, and Armaan needs not worry.

© Copyright tellybest.com, 2020, 2021. All Rights Reserved. Unauthorized use and/or duplication of any material from tellybest.com without written permission is strictly prohibited.
Cached Saved on: Saturday 28th of May 2022 06:26:06 PM