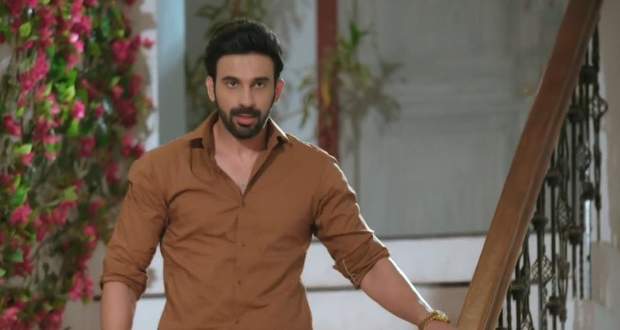 Today's Yeh Jhuki Jhuki Si Nazar 28th April 2022 episode starts with Bhavna suggesting Diya not take everything to her heart as she has a habit of joking.

Diya says she knows what kind of jokes are appropriate and what are just plain taunts.

Meanwhile, Sudha lightens ups the situation and says Armaan should take some days off as he got married yesterday.

On the other hand, Armaan and Diya say that their casual leaves are over and have to return back to work which pricks Sudha.

Sudha says if Diya is working that doesn't mean that she should ignore her responsibilities as a wife.

Later, Sudha taunts Diya while she sends her for the Pag Phera ceremony saying they both are the same in every aspect as they are now Rastogis but the only difference is that Diya has a job.

Sudha asks Diya to touch her feet and receive her blessings as she is the mother-in-law.

Later, Diya arrives at her maternal house and hugs her parents Anju and Brij.

Meanwhile, Krish hands over the gift sent by Sudha to Anjali for the Pag Phera ceremony.

Sudha says she sent a diamond set to the Mathurs while Bhavna feels jealous and says they don't deserve an expensive gift.

Meanwhile, Anju and Brij get tensed after receiving an expensive gift and how they will return it.

Later, Sudha says now Diya will be challenged as she challenged her for being a housewife in the morning.

On the other hand, Diya understands Sudha's intentions and sends a gift to the Rastogi house.

The gift arrives in a box while Sudha unwraps it and finds Maa Saraswati's idol in it.

Sudha is impressed by Diya's response and feels good even though she lost this battle.

On the other hand, Armaan daydreams while he looks at Diya's pictures.

Meanwhile, Armaan and Diya talk to each other on the phone while Palki teases them.

Later, Sudha talks to Bhavna about spending some time with her three kids and having dinner together.

Meanwhile, Sudha says Diya will take some time to adjust to the family as she has just arrived.

Later in the evening, Armaan informs Sudha that he might get late due to work and arrive at 9:30.

Meanwhile, Armaan's colleague suggests he leave as his work has a different deadline.

Later, Armaan thinks of meeting Diya for the time being.