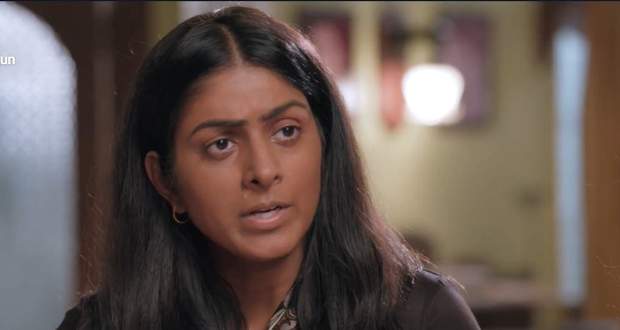 Today's Yeh Jhuki Jhuki Si Nazar 2nd April 2022 episode starts with Anju selecting a dress for Diya as the family of the potential groom is about to visit their place.

Meanwhile, Nimmo calls Bhavna and Sudha to inform them about Diya's marriage.

On hearing this Bhavna is relieved and congratulates Sudha for getting Diya out of their way.

Meanwhile, Armaan is worried about Diya as her phone is switched off. Armaan calls Palki while she accidentally spills the information about Diya getting married.

Later, Armaan thinks of talking to Diya as soon as possible and gets worried.

On the other hand, the family of the potential groom arrives at the Mathurs and reveals a shocking piece of news.

The Mathurs find out that the groom is a divorcee and has two kids as well.

Later, Diya informs her family and says she was aware of it beforehand.

On hearing this, Jayroop and Anjali are shocked and feel worried for Diya.

Meanwhile, Diya talks to the potential groom while Armaan arrives and finds out that Diya is getting married to a divorcee with kids.

Armaan looks at Diya but she ignores him. Later, Palki asks for help from Armaan to make Diya understand.

Meanwhile, Rama says Diya is not allowed to work after marriage and should take care of the kids instead.

Surprisingly, Diya agrees to marry and accepts the conditions.

Later, Anjali gets skeptical of Diya's decision and suggests she think again.

Meanwhile, Armaan arrives in the kitchen and makes her realize that she is getting married for the sake of her family.

Armaan says she cannot marry a person she doesn't even know.