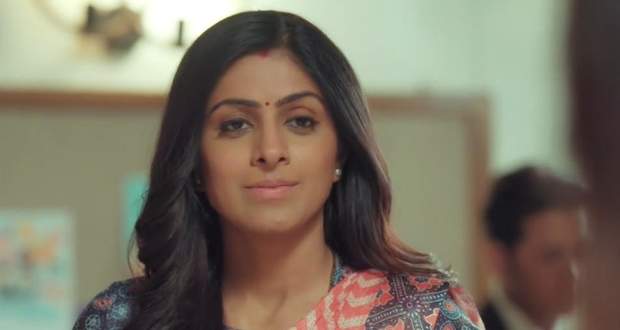 Today's Yeh Jhuki Jhuki Si Nazar 5th May 2022 episode starts with Sudha and Madhu chatting about Diya as it is her day off today from the office.

Later, Madhu wishes to take a shower while Sudha suggests she should use Krish's bathroom.

Madhu is shocked on her first day

Meanwhile, Sudha knocks on Diya's door to wake her up and finds out the door was locked from the outside.

Sudha is shocked to see Armaan and Diya together in the room while Madhu shouts in anger and they all walk towards Krish's room.

Heated up by the presence of a girl in Krish's bedroom, Madhu scolds Sudha and accuses Palki of luring her son Krish.

Sudha is heated up and blames Diya as she thought of her comfort but Diya betrayed her instead.

Palki is forced to apologise

Later, Sudha and Madhu join Palki, Diya and Armaan at the puja.

Meanwhile, Madhu blasts Diya and Palki about the topic of Krish and Palki.

Later, Diya asks for an apology from Madhu and explains Madhu should forgive them but Madhu disagrees.

Madhu accuses Palki of misbehaving with Diya's in-laws and asks for an apology from Palki instead.

Meanwhile, Armaan opposes Madhu's demand as it was Krish's fault and not Palki's.

Madhu differentiates between Krish and Palki by calling Krish a kid but at the same time blaming Palki.

Krish and Armaan favor Palki and oppose Madhu for asking for an apology from her.

Meanwhile, Palki agrees to seek an apology from Madhu while Armaan and Diya feel bad for Palki.

Later, Sudha taunts Diya by saying that Diya has a big heart and reminds her of the Haldi ceremony where she talked about how apologizing is a good moral value.

Sudha and Bhavna smirk with joy while Diya feels bad for Palki.

Later, Sudha talks to Bhavna about how Diya's life will be turned to hell by Madhu.

Meanwhile, Palki packs her bags and finds an excuse to leave and not humiliate Diya any further.

Diya feels guilty for not being able to protect Palki and apologizes to her sister.

Armaan and Krish apologize to Palki while Palki lightens the situation with her humor.

Later, Palki leaves for her home while Krish offers to drop Palki.