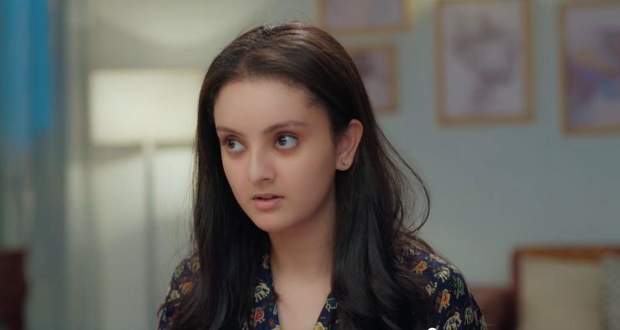 Meanwhile, Palki arrives and Sudha fakes to feel bad for her.

Sudha says she wanted Palki to stay a bit longer and is happy to see the love between the two sisters.

Later, Sudha and Bhavna discuss how no one can be saved from the terror of Madhu bua.

Bhavna tattles in Sudha's ears about the changed attitude of Armaan as he is thereby Diya standing like a rock beside her.

On the other hand, Diya tries to prove her point about Palki and her innocence and discusses it with Armaan as the older generation can also be wrong sometimes.

Meanwhile, Armaan suggests Diya look at the situation of Madhu bua with a different lens as Madhu comes from a humble background and Armaan's father never wanted her to feel sad at the Rastogi house.

Later, Armaan also mentions that as Madhu didn't have any kids of her own, she considers Armaan, Krish, and Bhavna as her own children.

On the other hand, Diya explains that Madhu bua should understand that she is also a part of Armaan's family now and should be given equality.

Diya promises Armaan that she will try her best to win Madhu bua's heart while Armaan hugs his wife and wishes her all the best.

Meanwhile, Madhu taunts Sudha about keeping her control of the house and holds everything tight.

Later, Madhu suggests organizing a Satyanarayan puja at her house after Armaan's marriage.

Ready to do all the arrangements, Sudha agrees to do the puja, but Madhu has some other plans.

Madhu says that Diya will be new in charge of all the arrangements for the puja.

Krish hints to Anju that Diya and Palki are very strong and will face any obstacles just like Madhu bua.

Meanwhile, Anjali asks Krish to stand by Diya like Lakshman and Krish assures Anjali that he will be there for her no matter what.

Later, Madhu calls on Anju's phone and tells her that it is their daughter's test tomorrow and they should arrive to see the results.

On the other hand, Armaan tries to boost Diya's motivation and tells her not to worry.