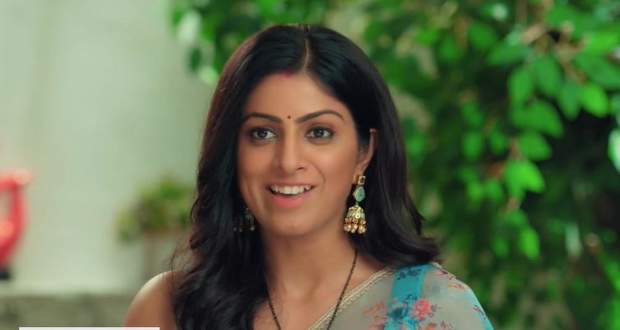 Today's Yeh Jhuki Jhuki Si Nazar 9th May 2022 episode starts with the Mathurs arriving at the Rastogis while Anju seems tense for her daughter Diya.

Meanwhile, Sudha and Madhu arrive and without any filter start to taunt Anjali that she wanted to see her for a long time to tell Mathurs about the values they have given to their daughters.

Meanwhile, the Panditji appreciates Diya's preparations for the puja while Bhavna waits for the bomb to blast.

Later, Diya is told to distribute the prasad while Bhavna waits for her neem oil scandal to do its job and get Diya in trouble.

On the other hand, Madhu appreciates Diya's preparation while Bhavna is in shock.

Later, Diya thinks of how she managed to cook another Prasad as she saw a cat in the kitchen who might have spoiled the prasad that she prepared earlier.

Meanwhile, Madhu gives her blessings to Diya and announces her success in passing every test with responsible behavior.

On the other hand, Diya hands over the shagun to Sudha for showing faith in her while Sudha showers her with love.

Later, Sudha leaves for a Mundan ceremony in Jammu while she hands over the keys of the house to Diya.

Bhavna and Madhu feel left out and get jealous of Diya as she got the keys and not them.

Meanwhile, Bhavna and Madhu plan on creating problems for Diya as they find themselves more deserving.

Later, at night Diya is tensed if she can fulfill all her responsibilities without making any mistakes.

Bhavna on the other hand arrives near the balcony and hears the couple while she keeps an eye on the keys in order to win her place back.

Further, Armaan shares a shayri for Diya and holds her from her waist.

Later, Armaan places the keys in Diya's waist as she left them earlier in the bathroom and got tensed because of it.

Meanwhile, Diya attaches the keys to her phone as her phone will be with her forever and there is no chance of error.