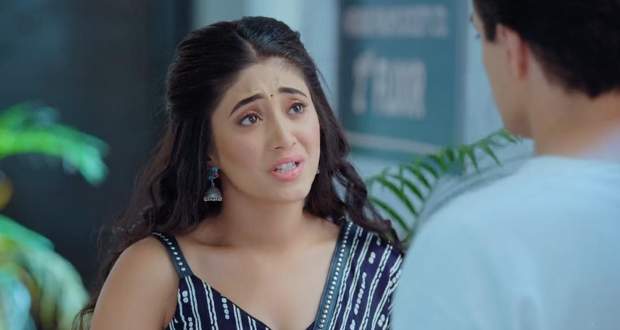 She gets a message from Kartik informing her that Kairav ate Idli made by Riddhima which upsets her as he doesn't like Idli.

Meanwhile, Kairav tells Kartik that he wants Aai's Kachoris and he happily gives him the Kachori's made by Naira.

Kairav sends Naira a smiley pin through the basket which makes her ecstatic.

Elsewhere, Manish informs others that he is going to Mumbai which makes Naksh-Kirti worried.

However, Naksh stops them from going stating that his medical condition does not permit him to travel.

Pyaremohan is stopping the guy who collided with Kartik from going inside while Naira comes there asks him who he wants to meet.

He introduces himself as Vikas and says that he wants to meet his childhood friend Riddhima. He reveals that Riddhima's husband and child, Arjun died in a car accident.

Naira gets shocked hearing the news while Kairav sleeps on Riddhima's lap.

Kartik informs Riddhima that he wants to put Kartik in a proper art class and she agrees.

The doorbell rings and Riddhima opens the door to reveal Vikas and she gets speechless.

Kartik takes Kairav with him to his room while Naira watches them from afar.

Vikas tries to talk to her but she shuts the door saying she has a meeting.

Elsewhere, Naira informs Kartik about Riddhima's past and feels guilty for making her feel bad.

She tells Kartik to invite Riddhima over for dinner.

Kartik, Naira and Riddhima are leaving for dinner while Kairav watches them and Naira hides.

Kairav insists to go with them which makes Naira sad.

She tells Kartik to take him as he will feel good.