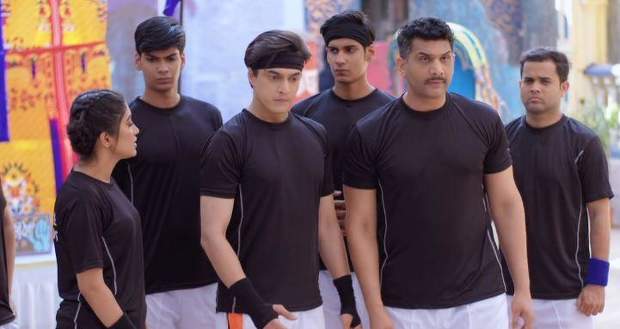 Sirat and Kartik declare that it's time to play the fair game and both teams challenge each other. Meanwhile, Vansh tells Gayu that Luv and Kush have gone to play for Sirat and Kartik’s team.

Kartik and Sirat gear up along with Goenkas while Sirat tells them that the game is freehand and there are no rules.

Kartik asks Sirat to not play as they will try to injure her. Sirat protests but Kartik consoles her and says they will use her if needed.

The referee says that one team player is short on Kartik’s team. Sirat wishes to play while Kartik refuses to let him.

Rohan comes at the same time and joins Kartik’s team. Sirat thinks Rohan is crazy as he left his own girlfriend while Rohan has come for his friendship.

Meanwhile, Nia is unable to find out about Vansh and Gayu’s conversation. Later, the game starts and Mukesh wins the toss.

Mukesh and Sirat get into a verbal fight while Kartik tries to console Sirat. Mukesh takes the referee on his side.

Sirat is furious as Mukesh has said bad things about Kartik.

© Copyright tellybest.com, 2020, 2021. All Rights Reserved. Unauthorized use and/or duplication of any material from tellybest.com without written permission is strictly prohibited.
Cached Saved on: Sunday 9th of May 2021 04:54:06 AM