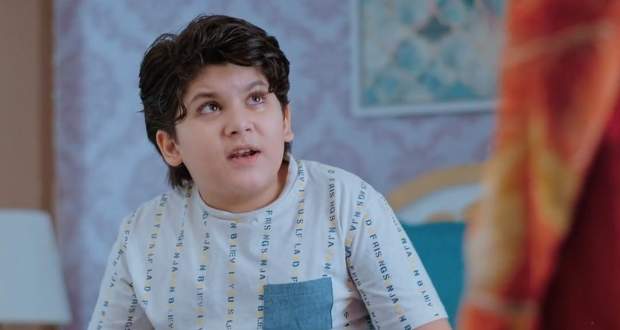 Naira voices her concern about Riddhima coming to live near them and Kartik tells her that it's just her way of doing therapy.

Kairav comes while Naira hides behind the desk.

Riddhima calls Kartik and says that she has made Pancakes for Kairav.

Kairav convinces Kartik and they go to Riddhima's house to have pancakes Naira feels hurt.

At Riddhima's house, she gets Kartik's permission to accompany Kairav in Football while Kartik admiringly talks about Naira which makes her emotional.

Meanwhile, Vansh reveals to Gayu that the accident was his fault and not Kairav's.

Maushi talks about Riddhima in front of Naira which makes her feel doubtful of Riddhima.

Naira goes to Riddhima to watch Kairav play football where Riddhima shows her gratitude to her for letting her spend time with Kairav.

At the same time, Kairav's friends call him a cheater and tell him to leave the game.

Elsewhere, Gayu tells Goenka family that she has found out the truth and says that she wants to talk to Naira which makes them happy.

Riddhima takes Kairav with him while an argument erupts in the Goenka mansion.

Naira plays with the kids and makes them realise their mistake after which she tells them to apologize to Kairav.

Kids apologize to Kairav and tell him that a lady made them understand their mistake.

© Copyright tellybest.com, 2020, 2021. All Rights Reserved. Unauthorized use and/or duplication of any material from tellybest.com without written permission is strictly prohibited.
Cached Saved on: Thursday 28th of January 2021 02:06:30 PM