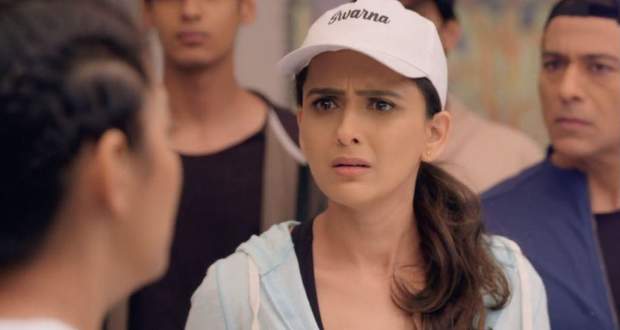 Kairav thinks that Kartik will understand that his mother is on a special mission and he will accept Naira when she comes.

Kartik thinks that they have to find happiness from small things like Naira from making smiley and planning picnics at home.

Sirat and Rohan are coming to Udaipur by bike. Sirat sees her bracelet on the way and Rohan says that there could be many bracelets like that of hers.

Goenka's struggles with Akshu who is crying a lot and Suhasini thinks that Akshu needs a mother.

Rhea asks Kartik if that girl looks like Naira Kartik says yes but she is altogether different from Naira.

Rhea smirks and thinks that the girl has got a point to enter Goenka’s house.

Sirat and Rohan admire Goeanka’s mansion, Sirat is hesitant to knock on the door but Rohan inspires her to go.

Gayu comes out, she becomes surprised to see Sirat, remembers her moments with Naira and she becomes delighted.

Gayu tells Sirat that she was sure that Naira would come back and tells her to come inside but Sirat runs away.

Sirat tells Rohan to get back as Goeanka’s love Naira a lot and she cannot face them.

Guy tells Kartik to stop Naira otherwise she will go away. Surekha asks Kartik if that girl is not similar to Naira then how come she got confused.

Kartik says that she is a girl who looks like Naira but Gayu refused to believe him while everyone in the house becomes shocked.