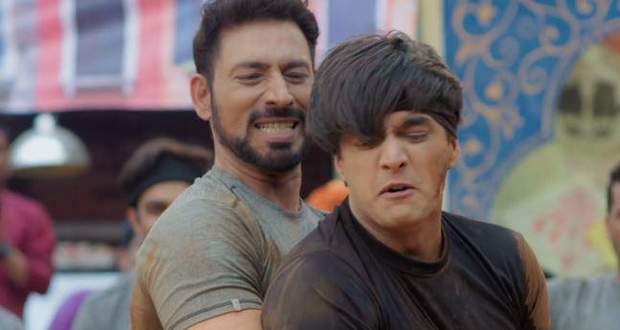 Today's Yeh Rishta Kya Kehlata Hai (YRKKH) 12 March 2021 episode starts with Kartik using his father’s advice to defeat a player of the opponent team. However, Kartik falls down and Mukesh points this.

He says if Kartik stands up in 5 counts then their team will stay otherwise they will lose. Sirat wishes to join Kartik to defeat the opponents.

Suhasini doubts Sirat’s capabilities while others in the Goenka family think Sirat can win against Mukesh.

Sirat plays against Mukesh while he holds her feet. Manish gives tips to Sirat and she frees her feet to touch the white line.

However, Mukesh again holds her feet and Sirat is face down on the ground. Maudi gets really worried for Sirat and asks her to give up.

Kairav encourages Sirat while Kartik is not able to see her in pain. He asks her to give up as he will fight and win.

Sirat gives up while Kartik and others applaud her. Kartik again fights one of the opponents and beats him.

Sirat gets worried for Kartik as Mukesh is the strongest. Mukesh again mocks them while Sirat encourages Kartik to fight for himself as well.

Kartik fights against Mukesh and plays on one leg. He touches Mukesh and tries to reach the other side but Mukesh holds him.

Mukesh puts pressure on his injury while everyone gets worried for him.