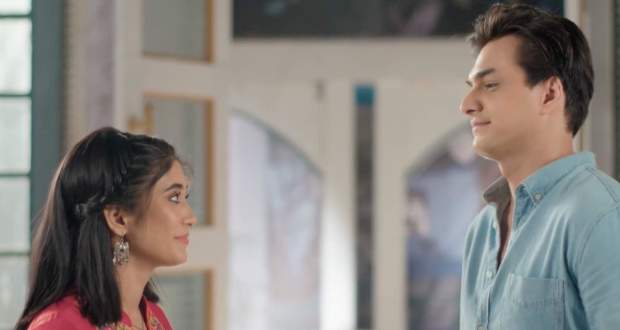 Today's Yeh Rishta Kya Kehlata Hai (YRKKH) 13 April 2021 episode starts with Suhasini asking Sirat to keep Ghangor fast as a pre-marriage ritual this makes Sirat recall her past and she gets upset.

Sirat agrees with Suhasini's request to keep the fast this makes Kartik shocked but Sirat tells him that the deal is between them both and not the family so she won't hurt them.

Meanwhile, Ranvir gifts girls sports equipment for their match and misses Sirat as he remembers her every time.

Further, everyone copies Sirat's style of making Ghangor idol and laugh at each other.

Later, Sheela asks for more money from Riya for knowing about Sirat's past.

Kairav spends a good time with Akshara telling her that God took away their mother but has sent Sirat to them forever this makes Kartik emotional.

While making the idol, Sirat misses Ranvir as earlier she used to keep fast for him but her effort went in vain as they both didn't get together.

Kartik wipes off the soil on Sirat's face and while they leave their hands get tangled with each other.

© Copyright tellybest.com, 2020, 2021. All Rights Reserved. Unauthorized use and/or duplication of any material from tellybest.com without written permission is strictly prohibited.
Cached Saved on: Wednesday 28th of April 2021 11:23:09 PMCached Disp on: Thursday 6th of May 2021 06:30:11 AM