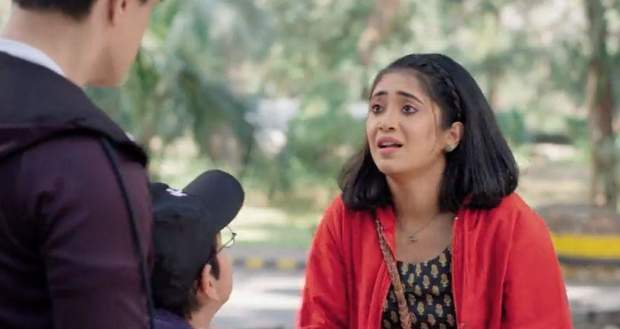 Today's Yeh Rishta Kya Kehlata Hai (YRKKH) 13 February 2021 episode starts with Gayu stressing the fact that she has seen none other than Naira, she is her sister she can’t fail to recognize Naira.

Suhasini asks Kartik if that girl looks like Naira, to which Kartik says that yes she looks like Naira but he has checked her background, she has her own family and different dreams.

Surekha says that if that girl looks like Naira then she must have come here for the money but Kartik says Sirat is not like that.

Kairav overhears their talk and thinks that Gayu Maasi has also seen Naira and he must go to meet his mother.

Kairav runs behind Sirat, Sirat looks back and sees Kairav being followed by a truck, she runs to save Kairav.

Vansh tells Kartik that Kairav is not at home. Kartik analyses that he must have heard them and gone to meet Sirat.

Kairav hugs Sirat and says that he was sure that she will come back, he loves her a lot and keeps on telling about her to Akshu as well.

Kartik looks for Kairav and he sees him with Sirat. He tries to separate Kairav and Sirat. Kartik asks Rohan to take Kairav from there.

Kartik asks Sirat that why have you come here. Sirat says that she has lost her father when she was very small.

She can realize the pain of Kairav, when she saw Naira’s picture she came here to apologize to Kairav.

Kartik says that he accepts her apologies, even they are sorry for disturbing her life as they were responsible for losing her match and he requests her never to come in front of Kairav again.

Kartik takes Kairav with him while Kairav keeps on repeating that he wants to go along with his mother.

Kartik scolds Kairav badly for not listening to him and Kairav gets faint on reaching home.

Manish makes Kartik understand that after all Kairav is a child, he must not be rude to him.

Swarna says that Kartik was also able to forget his mother after so many years, it will take Kairav time.

Sirat feels guilty for ruining Kairav’s life and making him feel sadder. Rohan consoles her that she is a fighter and she has to fight her both inner and outside battle.

Rohan motivates Sirat that the next day is her match and she will fight against everyone herself, her outside conditions, Sheila and Mukesh, and be victorious.

Kartik decides that he will make memories of Naira strong in Kairav’s mind.