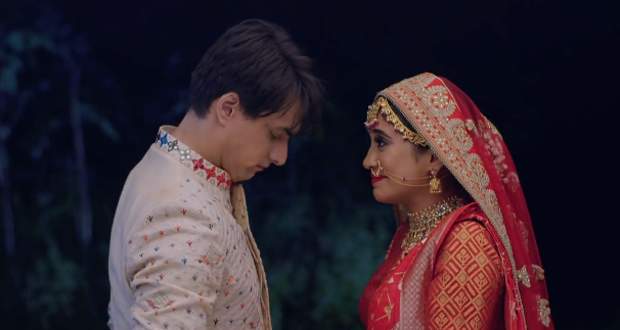 Today's Yeh Rishta Kya Kehlata Hai (YRKKH) 13 Nov episode starts with Kartik pushing the horse cart to reach home on time. Meanwhile, Naira is stopped by the police and is accused of being a runaway bride.

Suhasini gets worried about Kartik and Naira while Kartik’s cart gets started. However, it runs very slow and Kartik gets worried.

Naira asks the police to let her go to her original husband while she calls Kartik to let the police know that he is her husband.

The police still don’t let Naira go while the groom arrives and says Naira is not his bride. He accuses Kartik of taking away his cart and bride.

The police let Naira go but she is not able to find an auto. She decides to drive the abandoned auto on her own and they meet midway.

Kartik and Naira spend some special moments while Naira gets the material for Karva Chauth pooja from the auto.

She is not able to find a sieve so she uses her Chunri for breaking her fast. They just send a photo to Suhasini and not tell when they will come.

Kairav realizes Kartik and Naira doesn’t have water while Kartik gets in danger because of taking water from some villagers.

Kartik is accused of being a thief while the police save him and they get water. Meanwhile, Manish gets really furious with Kartik for not attending a meeting.

However, Kartik gets unconscious and they are not able to break their fast. Naira reaches home while Suhasini gets worried about their fast.

Upcoming YRKKH episode update: Manish gets mad at Kartik for not taking care of the business properly.

© Copyright tellybest.com, 2020, 2021. All Rights Reserved. Unauthorized use and/or duplication of any material from tellybest.com without written permission is strictly prohibited.
Cached Saved on: Friday 6th of August 2021 03:21:22 AM