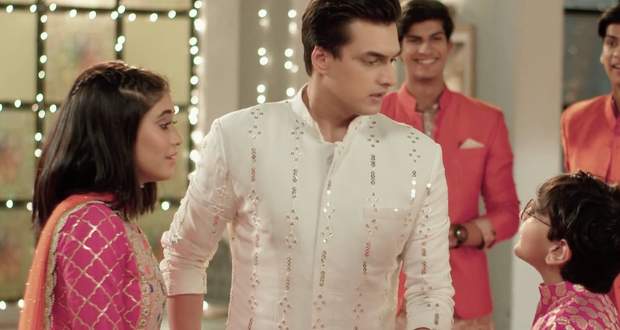 Today's Yeh Rishta Kya Kehlata Hai (YRKKH) 14 April 2021 episode starts with Kartik and Swarna having a casual talk with each other.

Swarna suggests to Kartik that he should gift Sirat something special at Gangaur festival.

Kartik decides to gift shoes and gloves to Sirat and indirectly the order gets placed in Ranvir's company.

At home, while everyone is busy in pre-festival preparations Kairav insists Sirat and Kartik to dance with him.

Later, Sheela conspires a wicked move to break Sirat's Gangaur idol but fails as Sirat manages to balance herself.

Kartik comforts Sirat as she gets worried for the idol by saying that she should not worry much about the things that haven't happened yet.

Further, Sirat's maudi invites Kartik and his family to her room for a ritual.

Meanwhile, Ranvir feels the pain of Sirat's separation and he breaks down in her memories.

Ranvir packs the gift and says that whoever must be gifting it to someone is special.

Ranvir then calls Kartik to ask him for the delivery address.