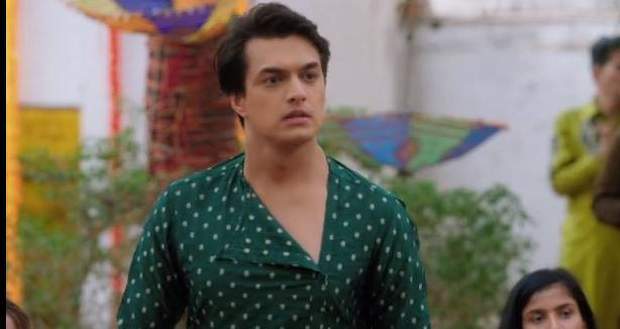 Today's Yeh Rishta Kya Kehlata Hai (YRKKH) 15 March 2021 episode starts with Kartik walking down the street and remembering Naira. Sirat confronts him and they both act of fighting in front of Kairav.

Sirat refuses to dance with him while Kartik tries to convince her. Kartik starts praising Naira while Kairav overhears everything.

Sirat gets emotional to hear Kartik’s feelings while they both hope that Kairav understands the truth. Sirat shares her pain of losing her love as well.

Mukesh and Sheela are unable to go out as their door is locked. Sheela asks Mukesh to break the door while Mukesh fears going to jail.

Sirat tries to console Rohan’s girlfriend that she has no feelings for her boyfriend. She admits that they are doing it just for Kairav.

Rohan’s girlfriend agrees but wishes to do the Pooja with Rohan only. Further, Kartik is immersed in Naira’s memories and tries to come out of them.

Mukesh gets angry as they are not able to get out of their house. He is furious and challenges to get the house back. This declaration is heard by Sirat.

Suvarna and others at Goenka's house miss Naira and remember her wish to put Bail Patri on Swayamvar Shivling.

Kartik is surprised to see Sirat performing with Rohan. She dances just like Naira while Kartik rushes to save Sirat from falling.

He calls her Naira and also hugs her tight. They accidentally put Bail Patri on the Shivling and also a garland falls around them.

Upcoming YRKKH episode update: Everyone finds Kartik and Sirat hugging each other in the house alone.