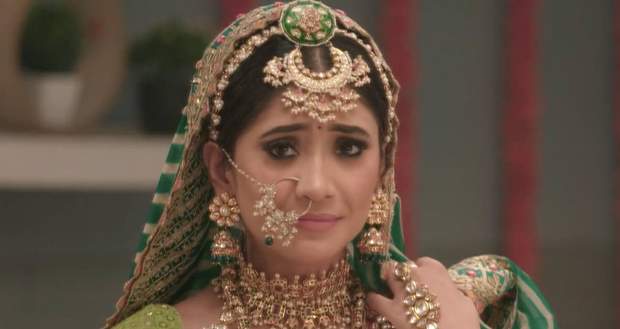 Kartik calls Ranvir and tells him about Sirat's happiness.

Meanwhile, Sheela troubles Swarna and Suhasini with her parlor tips.

Later, Chandan tells Ranvir that his family is shifting to Udaipur and so they need to shift their business somewhere else.

Ranvir gets upset about this and he tells Chandan that his father took away all his happiness and so he left the house with a wrenched heart.

Further, Sirat gets a disturbing thought as she sees the decorative flower same as Ranvir used to make for her.

Sirat's maudi says that from now onwards the bride and the groom have to perform all the rituals together.

Kairav announces a competition saying that the best decorative idol will win a special gift.

Riya is about to plan a conspiracy against Sirat as she stands by the Ghangor idol made by Sirat.

Kartik and Sirat dress up beautifully for Ghangor festival.

© Copyright tellybest.com, 2020, 2021. All Rights Reserved. Unauthorized use and/or duplication of any material from tellybest.com without written permission is strictly prohibited.
Cached Saved on: Sunday 9th of May 2021 03:28:42 AM