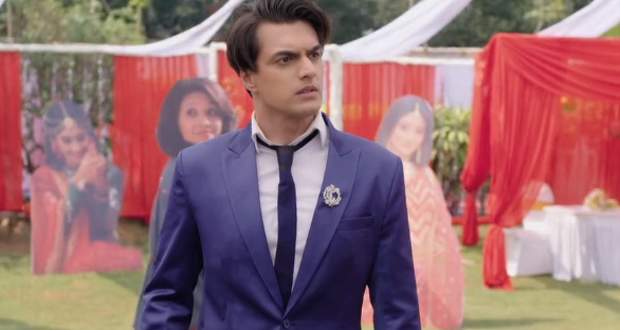 Kartik sees a service person talking about the smaller cake which Rohan ordered for Sirat. He decides to make her day special too since it is his beloved wife's special day.

He leaves a bigger cake for her. He especially asks to not reveal his identity to Sirat.

Sirat who is already stunned to see all the decorations and the dress gets even happier. She says that it is the first time she has felt so special in her life.

She makes a tissue paper flower to thank him. The serviceman asks her to leave it on the feedback wall which is later seen by Kartik.

Sirat and Rohan take a place in an isolated corner to celebrate. Suddenly, they hear Kartik's voice on the speakers. Sirat starts paying attention as he talks about Naira.

Kairav believes his mother will show up in the event.

After a while, Sirat can't control the urge to see Kartik. She gets up from her seat and starts moving towards the venue.

She then trips over something and realizes that she has landed into a moving object. It turns out to be a huge gift box opened from one side that Kartik arranged for his celebration.

As she tries to balance in the structure Kartik presses a button. Confetti comes around the structure, it rotates and reveals Sirat in front of the Goenka family.

© Copyright tellybest.com, 2020, 2021. All Rights Reserved. Unauthorized use and/or duplication of any material from tellybest.com without written permission is strictly prohibited.
Cached Saved on: Wednesday 22nd of September 2021 08:21:53 AM