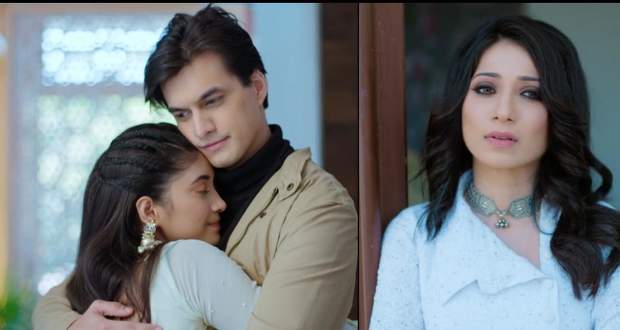 Riddhima says that she also brought Kairav's favourite cake while Kairav compares her with Naira which makes her feel bad.

Kairav suggests Kartik that they should give the cake to Aai and tell her that his family has arrived.

Naira gives a plate of cake to Riddhima and she drops it and gets distant hearing Kartik's words.

Surekha taunts Akhilesh and tells him to make sure the preparations for Luv-Kush's restaurant are done.

Elsewhere, Kartik helps Naira in the kitchen while they romance.

Riddhima sees them and remembers how her husband used to torture her.

Kartik goes to check on Riddhima who hugs him and starts crying.

Naira sees them and Maushi starts taunting Riddhima which shocks Riddhima and she starts apologizing to Naira.

Kairav questions Maushi while Kartik reveals that she works at Aai's flat.

Later, Kairav asks Riddhima to take a family picture of them which saddens her.

Riddhima reveals to Kairav that Naira was the Aai staying above them and sending him food.

Upcoming YRKKH episode update: Naira to find out of Riddhima's licence being cancelled.