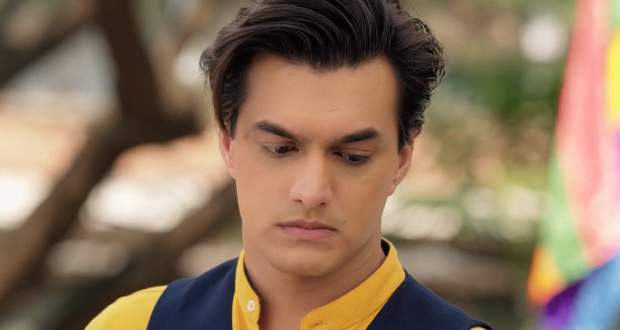 Manish reveals that Kartik has left with Kairav to prove his child can’t live without him. He is sure that Kairav will return home with him.

Kairav and Kartik play a connecting words game. Kairav remembers the time he was packing and when Vansh wanted him to stay.

Kairav shows his concern for Kartik in front of Vansh and doesn’t want Kartik to get troubled because of him.

Kartik stops at a roadside stall where Kairav sees a boxing poster. Kartik is not ready to allow Kairav to enter boxing while Kairav is sure Naira would have supported him.

He sees a lady practicing boxing behind a closed tent and copies her moves. Kartik wants him to back out of his idea while Kairav shows his excitement.

Kartik decides to leave an important file in the car so that the school makes them leave. However, Kairav remembers it and his plan fails.

Kartik tries to make another excuse to delay the admission but still fails. Meanwhile, Manish learns that Kairav has gone because of Kartik.

Kartik tries to find ways to get out of the admission but fails as the hostel and school are top class in everything.

Manish talks to Kairav and takes a promise of telling him if and when he feels lonely. Kartik is unable to sign the admission while Kairav is also sad.