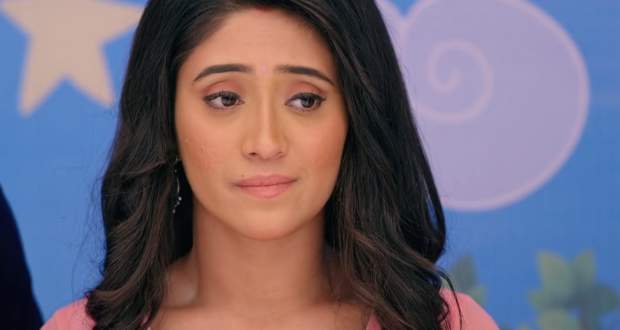 Today's Yeh Rishta Kya Kehlata Hai (YRKKH) 18 Nov episode starts with The principal telling Kartik and Naira that he was shocked to see a gun in Kairav’s hand. He further states that Kairav said he found it in the dustbin.

Kartik scolds him for holding the gun while Kairav lies that he thought it was a toy gun. Naira feels suspicious and asks why the dustbins are not covered.

She starts enquiring while Kairav stays quiet. Elsewhere, the Goenka family is shocked with the news while Manish has full confidence Kairav can’t do anything wrong.

Kartik asks Naira to talk to him at home while the principal praises Kairav for being no.1 in everything.

Naira and Kartik scold Kairav while the kids apologize. Naira breaks down after Kairav leaves and is worried for her kids a lot.

Kairav wants to hide his test which he failed and acts of being sick. Naira finds the test in his bag and gets shocked to see a bad grade.

Naira scolds Kairav while Manish and Suhasini laugh at his mistake. They state that everyone has made these kinds of mistakes in school and take it very lightly.

Naira doesn’t like their attitude towards Kairav. Later, Naira shares that she is upset because Kairav lied to them. Naira says he is not like he was in Goa.

Kartik thinks Naira wants to imply that he and his family have spoiled him. Kartik thinks Kairav has lied because of Naira’s strictness.

Naira says strictness is important for kids while Kairav overhears this. Kartik makes Naira smile and freshens up her mood.

Kartik further tries to cheer up Kairav by playing basketball. He plays with Kartik but later refuses to play with Naira.

© Copyright tellybest.com, 2020, 2021. All Rights Reserved. Unauthorized use and/or duplication of any material from tellybest.com without written permission is strictly prohibited.
Cached Saved on: Friday 6th of August 2021 02:12:20 AM