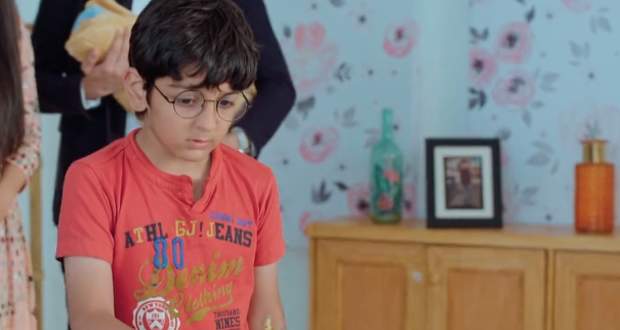 Today's Yeh Rishta Kya Kehlata Hai (YRKKH) 19 December 2020 episode starts with Ridhima explaining to Kairav that her mom and Aaee are the same.

After listening to the truth, he runs outside and reaches his destination. He rings the bell of the door, but no one replies.

At once, Naira takes out the keys and opens the door. He admires the room and every little thing and remembers the incident.

Kairav's eyes are full of tears, and he says sorry to his mom.

As because of him only she was angry and left the house. He also accepts that he missed her a lot and promises that he will never do the same thing.

Afterward, Kartik appreciates Ridhima that she has solved such a big problem and confirms her tickets to the United States.

Ridhima gets frustrated and destroys everything in her house. She says to herself that she will not let go of everything from her hand.

Meanwhile, Surekha creates a massive scene in the house that Naksh is treating Luv-Kush as servants. She also says a lot more bad things to him.

Manish and Akhilesh handle the situation and asks her to shut her mouth and apologize.

Meanwhile, Naira and Kartik are preparing a gift for Ridhima. Then Kairav's friend came in to call him to play football with everyone.

But it is Ridhima's tactic to call Kairav. Naira is anxious and goes to call Ridhima but she is not there. Her absence clicks in Naira's mind. She also sees Ridhima's canceled license.