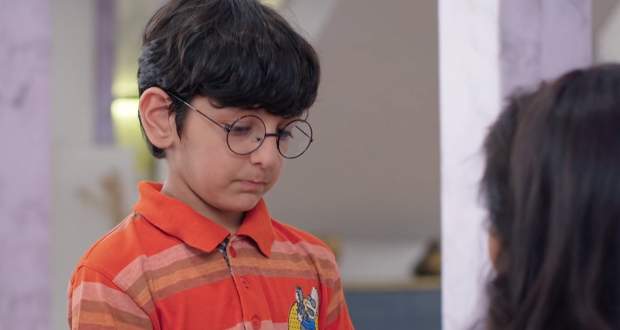 Today's Yeh Rishta Kya Kehlata Hai (YRKKH) 19 Nov episode starts with Kairav refusing to play with Naira. Naira gets really upset while Kartik consoles her. She decides to make things right between her and Kairav.

Kartik wishes to tell Vansh about Samarth shifting to Mumbai. However, Vansh and Kairav already know and share a sad moment.

Vansh asks Kairav to fulfill the challenge as he wants him to stay in the group. Kairav refuses to perform any challenge as the whole family is upset about the gun incident.

Naira confronts Kairav and apologizes for being angry at him. She asks him to tell anything he wants while Kairav tells the truth as a friend.

Gayu overhears this and rebukes Naira for not being a good parent. Naira gets frustrated and starts yelling at Kairav for putting their lives in danger.

She shouts a lot while Kartik comes there and asks Naira to calm down. He consoles both Kairav and Naira and tries to handle the situation.

He asks Kairav to go inside and he leaves in anger. Gayu accuses everyone of being very lenient with Kairav and being partial.

Naira gets really upset and starts crying uncontrollably. Later, Suhasini thinks it is Naira’s mistake while Manish thinks Kartik is at fault.

Vansh instigates Kairav and suggests performing the next challenge by jumping on the mattresses. Meanwhile, Kartik encourages Naira to not give up.

Kartik says Naira should be his friend as Kairav shared everything as she became a friend. Later, Manish rebukes Kartik for taking Naira’s side.

Further, Gayu apologizes to Naira for being rude to her and explains her situation. She thinks that everything is just Kairav’s fault.

Upcoming YRKKH episode update: Vansh decides to perform the challenge and gets in danger.