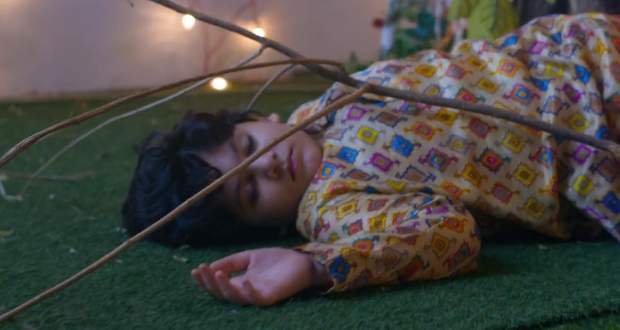 Today's Yeh Rishta Kya Kehlata Hai (YRKKH) 20 November 2020 episode starts with Naira bringing Kachori for Kairav and saying sorry. Kairav is making a portrait of him and Naira getting separated.

He states that he hates her while Naira starts shouting. It turns out to be a dream and the painting is just of a setting sun.

Naira makes the image of a mother and son but it gets spoiled due to curtain. Meanwhile, Vansh wishes to jump off the balcony while Kairav tries to stop him.

Kairav and Vansh start fighting and Naira is not able to see Vansh trying to jump. Gayu tells her that she will talk to Vansh in a while.

Later, Manish gives the file to Kartik and Samarth feels bad. However, Naira and Kartik give the file to Gayu to put a red tika on it.

Samarth leaves to get papers while the others start the Diwali pooja. Kartik and Naira do the Pooja but Kairav gets away from Naira.

Vansh leaves the Pooja and Kairav rushes to stop him. Vansh is about to jump but the workers remove the mattresses from the ground.

Naira goes out while Vansh is on the edge of the balcony making a video. Naira sees in the shadow and misunderstands Kairav for pushing Vansh while he is saving him.

Naira starts shouting and calls everyone outside. Kartik and others rush Vansh to the hospital while Kartik asks Naira about how he fell down.

The doctor says Vansh is stable but he has not gained consciousness. He also asks not to question Vansh about anything.

Vansh asks Gayu to stay with him while others are forced to leave.

Upcoming YRKKH episode update: Vansh is not able to move his feet while Gayu overhears Naira and Kartik’s conversation.

© Copyright tellybest.com, 2020, 2021. All Rights Reserved. Unauthorized use and/or duplication of any material from tellybest.com without written permission is strictly prohibited.
Cached Saved on: Sunday 9th of May 2021 10:50:06 PM