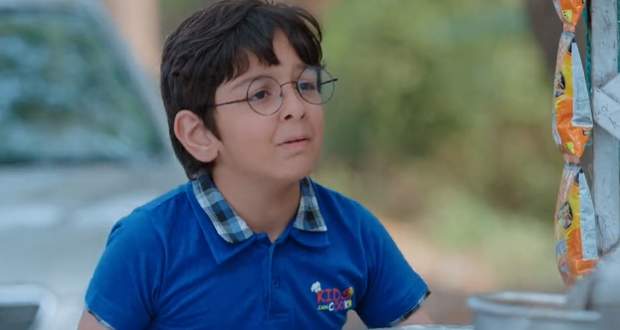 Kartik asks Naira if something is wrong with her, to which she replies that Ridhma is not there to help her but is there to get Kairav.

Kartik and Naira run and see from the balcony. They watch Kairav and get a bit relaxed but, Naira is still very anxious. While playing on the ground, Kairav goes down the stairs.

After that, they both go to the playground but are unable to find Kairav. They both start searching for Kairav.

Naira says to Kartik that Ridhima is the one who has taken her child.

The watchman appears he says that their child is there in a golden color car and the car goes towards the airport.

Naira and Kartik also follow the direction. Meanwhile, Suhasini is not well in the house as her blood pressure is low. Everyone in the family gets worried about her. She says that now is the time for her to die.

As in her dream, she sees that her husband asks her to come to him.

One of the family members states that if a person who dies comes in the dream then it is not a good sign.

Manish calls Naira and Kartik, but they are not picking up their phone. Meanwhile, Kairav remembers Kartik’s instructions in time of danger.

He tries to call his parents but does not get success. He makes a way to contact his parents by asking for help from a Chai-Wala.

He also leaves some signs on the road so that his parents could reach him. With the support of Chai-Wala and the clues, Naira and Kartik are getting near to their target.

Afterward, Kartik is fighting with Ridhima, and their car gets banged. Kartik and Naira see them and follow them. Naira finds Kairav's spectacles and, she hears Kairav screaming.

Upcoming YRKKH episode update: Kairav is on the verge of falling down.