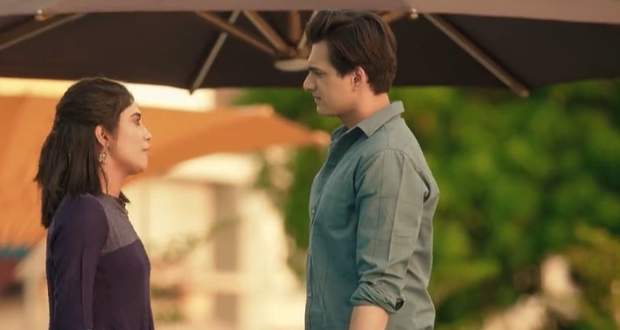 Today's Yeh Rishta Kya Kehlata Hai (YRKKH) 22 April 2021 episode starts with Sirat getting angry with Kartik as he forcefully brought her to the resort.

Kartik tells Sirat that he has changed their engagement venue so that it will be easy for her to manage her boxing practice and engagement ceremony at the same time.

Sirat gets happy knowing this and thanks Kartik.

Later, Kartik and Sirat pray before God as their wedding invitation cards get printed.

Further, Ranvir tries to forget his past with Sirat while talking to Chandan.

Meanwhile, Riya gets jealous of Sirat and tries to inflame her by saying that she and Kartik don't have any chemistry in between them.

Sirat retorts Riya by saying that she and Kartik have the best chemistry by holding Kartik's hand which makes Riya feel more jealous of Sirat.

Later, Suhasini asks Kartik to buy new clothes for Sirat for their engagement.

Sirat's maudi tells Sirat that she is going to tie a forever knot with Kartik and so she should respect the elder's choices.