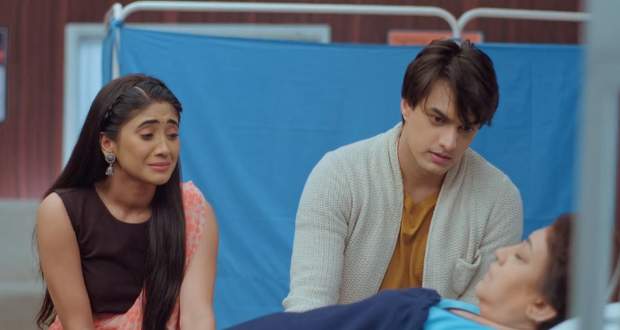 While he is not wearing his glasses so, he is not able to see anything. Ridhima also runs after him.

She pushes Kairav and saves him from falling into the deep lake but, she drowns in the lake. Meanwhile, Kartik remembers that she does not know how to swim.

Naira jumps in the lake to save Ridhima and, they come out safely. After that, they negotiate the talk and try to make Ridhima realize that she did wrong. They also try to make her understand that his Arjun is dead.

Naira urges her to stop all this. Also, to live for the purpose for which God has to send her on this earth.

Naira also explains that many kids need her help so she should help them. At last, Ridhima asks Kairav to hug her and never to hate her.

After a while, Kartik gets a call on his phone from Manish and, he answers it. Kartik is horrified that Dadi is not well and hospitalized.

Then Kairav says to his dad that we should leave for Udaipur as fast as we can.

He also advises them that they should live there. Then after hearing this verdict from Kairav. Both of them remember the reason for which they left the house.

They immediately go to the hospital and meet Dadi. They talk to her and, some miracle happens that, she is all fine. Then Manish and Dadi urge them to live with them.

© Copyright tellybest.com, 2020, 2021. All Rights Reserved. Unauthorized use and/or duplication of any material from tellybest.com without written permission is strictly prohibited.
Cached Saved on: Friday 22nd of January 2021 11:57:14 PMCached Disp on: Saturday 23rd of January 2021 04:08:28 PM