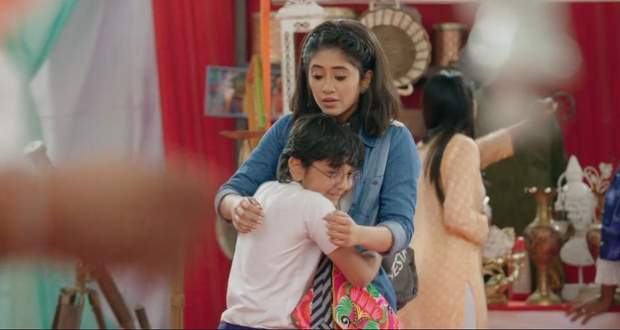 Today's Yeh Rishta Kya Kehlata Hai (YRKKH) 22 January 2021 episode starts with Sirat telling Eela that she knows why she wants to get her married and says that she wants Maudi's part of the property also.

Eela denies the accusation while Maudi kicks her out and locks her for on her face.

She tries to cam Sirat but she throws the vase towards the door.

Suddenly, Sirat's friend opens the door and saves himself from getting hit.

He asks Sirat if she wants to go to Sikarhaat and she response approvingly saying that the needs to get her certificate.

However, Maudi stops her and says that she's not going anywhere.

Elsewhere, Kairav's teacher calls Kartik and tries to convince him to let Kairav join the school trip to Sikarhaat but he denied and disconnects the call.

This family tries to convince him but get ignores them and goes.

Elsewhere, Maudi locks Sirat in her room and tells her that she needs to rest. Sirat says that she will rest only and tells her to not disturb her after which she leaves through the window.

She songs his friend to come out and he also goes with her.

Meanwhile, Kartik gets tensed seeing a girl holding Akshara and take her from the lady.

His mother comes there and reminds him that she is Riya.

Elsewhere, Kairav reaches the fair at Sikarhaat and goes to a bioscope to look into it.

Meanwhile, Sirat and her friend reach there while she sees the bioscope and runs towards it as his friend laughs at her.

However, she sees the price and decides to not go there after which she and her friend leave.

She goes back to take the bag with a certificate in it while Kairav sees her and goes after her.

She stops to tie her shoelace when Kairav comes there amd hugs her.

She tries to get him off of her but he holds her hand to stop.

Her friend calls to her and she forcefully leaves his hand and goes while Kairav's teacher takes him away.

He calls Kartik and tells him that he saw Naira.