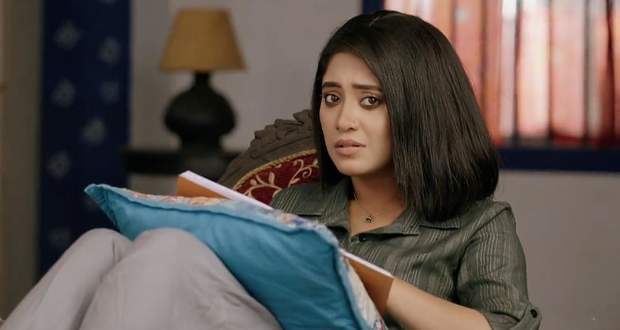 Today's Yeh Rishta Kya Kehlata Hai (YRKKH) 25 January 2021 episode starts with Kartik hiding in the boxing ring room to find out who comes there at night.

Someone comes there and Kartik flashes his flashlight at the person who turns out to be the security guard.

The security guard talks to him to distract him while Sirat gets out of there and leaves while getting angry at kids.

Kartik goes to Kairav and tells him that he didn't see anybody on the boxing ring room.

He tries to convince Kairav to come home with him due to which he gets angry that he won't and leaves.

Kartik decides to stay while at Goenka mansion, Manish questions himself if him sending Kairav to the hostel was good or not.

Next morning, Sirat is practising while Maudi talks to her.

She sees her mother and preparing for Nanko's birthday party and gets upset as she never remembered her birthday.

Later, Kartik reaches Sikarhaat to search for Naira where he helps Maudi from falling and offers to drop her home.

Elsewhere, Sirat gets upset seeing balloons and remembers how Eela left her on her birthday at Maudi's doorstep promising her that she'll bring balloons for her and leaving with her boyfriend.

Her mother came home without any gift and Maudi berated Eela while she dragged Sirat home saying she doesn't have money for her gifts.

In present, Nanko shows Sirat his birthday gifts and mocks her.

First tries to go after him but gets her clothes stuck.

At the same time, Maudi and Kartik reach her home.

Kartik leaves as Sirat comes outside.

Sirat offers to take the bags from Maudi but she resists.

In the struggle, the bags fall and a toy car comes outside while Sirat realises that she wants to hide the gift from her.

Maudi convinces her to come with her to wish Nanko a happy birthday a d they go upstairs.

Nanko takes the gift from her and leaves while Eela's boyfriend asks who invited her.