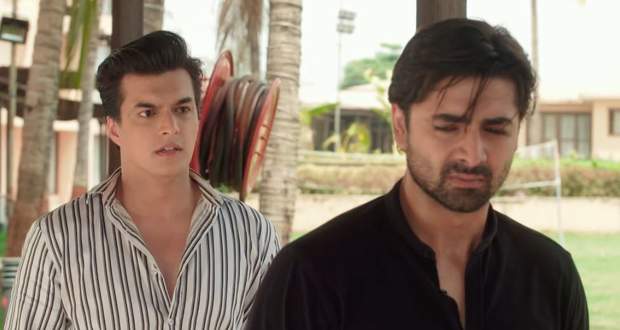 Later, Kartik tries to justify his actions and tells Naksh the reason behind marrying Sirat.

He tells Naksh that marrying Sirat is his children's choice and not his he is trying to keep his children happy and give them mother’s love and he isn’t betraying Naira for that.

Meanwhile, Sirat’s maudi explains Sirat that it is not her or Kartik’s mistake for their marriage as things happen as planned by destiny.

Further, Sirat applies eye drops in Kairav’s eyes as he gets hurt.

Riya asks Manish to reveal to everyone that Sirat has a past and she is betraying everyone this makes Manish upset but he tells Riya that he tried a lot but failed to do so.

Later, frustrated Ranvir hits a man with a glass bottle as he thinks he is trying to get close to Sirat.

Upcoming YRKKH episode (tomorrow) update: Kartik brings Ranvir to his room as he gets hurt.

© Copyright tellybest.com, 2020, 2021. All Rights Reserved. Unauthorized use and/or duplication of any material from tellybest.com without written permission is strictly prohibited.
Cached Saved on: Tuesday 28th of September 2021 01:49:59 AM