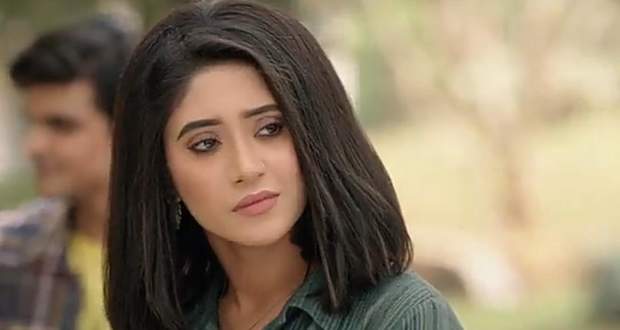 Today's Yeh Rishta Kya Kehlata Hai (YRKKH) 26 January 2021 episode starts with Eela asking Maudi to tell Sirat to get out of their house.

Mukesh throws chocolates at Sirat and tells Eela that they don't have to gove food to beggers and he has already given to one while looking at Sirat.

Eela throws the gifted toy car at Sirat which angers her and she says that the gift was from Maudi and realises that Maudi is crying.

Elsewhere, Kartik tells Kairav to go home with him but Kairav declines to which Kartik tells him to call if he ever wants to come home and goes.

Sirat gets on his bicycle and goes while Maudi tells Sirat's friend, Dushman to go after her.

Later, Kartik is drinking tea at a stall while he hears someone shouting 'Mendak' and looks back where Dushman is talking with Sirat but he can't look at her because of a poster.

They both leave while Sirat notices Kartik asks Dushman who is that handsome man.

Dushman offers to get his info for her but she declines and goes home.

Sirat goes home amd gives Maudi a burger while Maudi says that the man she made was just as white as cheese.

Elsewhere, Kartik reaches home and interacts with Riya while Surekha says that only Riya took care of Akshara the whole time he was gone.

Surekha suggests to Kartik's mother that they should get Riya and Kartik married and tells her to think about it.

Next morning, Mukesh tells Eela/Sheela that she should get Sirat married soon or else their marriage will be in a problem.

Sheela tells her that she'll call the boy's family tomorrow for the meeting.

© Copyright tellybest.com, 2020, 2021. All Rights Reserved. Unauthorized use and/or duplication of any material from tellybest.com without written permission is strictly prohibited.
Cached Saved on: Tuesday 2nd of March 2021 10:03:59 AM