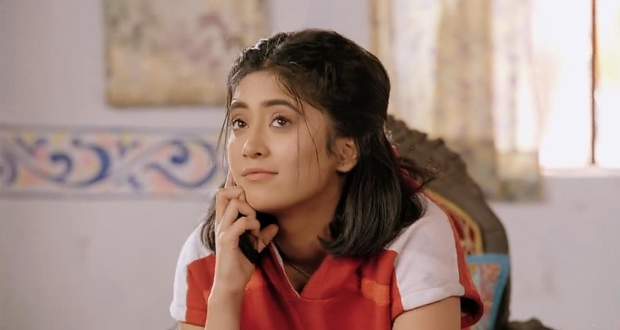 Today's Yeh Rishta Kya Kehlata Hai (YRKKH) 27 January 2021 episode starts with Sirat noticing a business card near the leg of the table and asking Maudi about it.

Maudi says that it might've been of the boy who helped her at the market and goes while Sirat decides to call Kartik to thank him.

She calls him but he doesn't pick up the call after which he calls her but she doesn't notice it.

She again calls him and says his name which shocks Kartik and he remembers Naira calling him while Sirat thanks him for helping Maudi and tells him to visit her the next time he comes to her city.

Sirat puts her phone aside and cries looking at her half-burnt gloves while Kartik gets worried hearing Sirat cry.

Sirat goes after Nanko but Sheela locks the look and doesn't let Sirat inside.

She goes downstairs where Maudi suggests her to marry to get out from the torture.

Elsewhere, Riya requests Kartik to let her hold Akshara and he agrees while they both talk about her reason for divorce.

Dushman tries to cheer up Sirat but she instead vents out her anger at him.

He tells her to give the thought of marriage another shot and manages to cheer her up while she says that she has to go work.

Sirat goes to Kairav's school to deliver something while Kairav notices her and bangs on the glass window.

She runs away while the teacher tells Kairav to calm down and assures him that he will take that girl's address and will meet her while Kairav says that he will join him to which they agree.