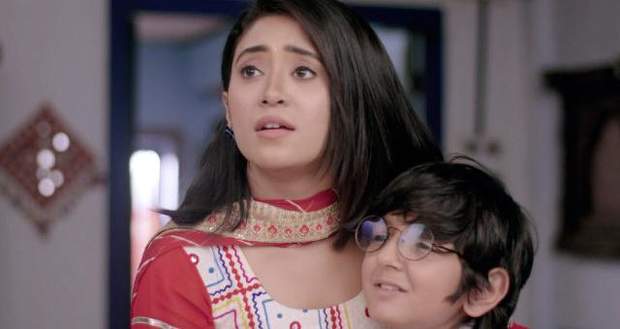 Sirat mistakenly drops Manish in the water pool. Later, everyone gets amused looking at Manish and he too laughs.

Riya tells Sirat that Manish is soon going to announce her marriage with Kartik. Sirat gets astonished as she feels that Riya is not the perfect match for Kartik.

Sirat asks Kartik that why didn't he let her know about the announcement. Kartik gets confused later Luv calls him for help and the conversation remains unanswered.

Later, Sirat's mother tells Suhasini that she will get Sirat married if she finds a well-deserved groom for her.

Suhasini starts thinking about Kartik and Sirat together but meanwhile remembers Manish is going to announce Riya and Kartik's marriage.

Later, Kairav goes to the outhouse, mistakenly he drops the matchstick, and the room sets on fire.

Luckily, Sirat comes on time and risks her life to save Kairav. She grabs Kairav and holds him tightly.

Kartik comes into the room to rescue Sirat and Kairav.

Sirat falls unconscious after coming outside. On doctor's examination, Sirat comes to know that her hand is injured. She gets panic but Kartik consoles her and she calms down.

The entire Goenka family thanks Sirat for saving Kairav.

Upcoming YRKKH episode (tomorrow) update: Kartik takes the blame on himself when the police come to arrest Sirat on Dev Chaudhari's complaint.

© Copyright tellybest.com, 2020, 2021. All Rights Reserved. Unauthorized use and/or duplication of any material from tellybest.com without written permission is strictly prohibited.
Cached Saved on: Thursday 28th of July 2022 04:27:52 AMCached Disp on: Wednesday 17th of August 2022 04:33:49 PM