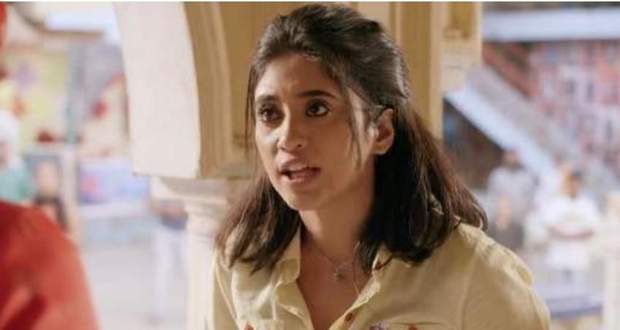 Nanko tells her that boy's family is coming to see her while Maudi drags her away to her room and tells her to change.

Elsewhere, Kartik talks on the call and tells them to have Kairav can't him the moment he reaches school and wonders if the school is hiding something from him.

Elsewhere, Kairav and ward of reach Sirat's neighbourhood to look for her.

Sirat meets the boy's family and they say the marriage can be fixed for next week while Sheela celebrates and puts a sweet in Sirat's mouth to prevent her from speaking.

Suddenly, Kairav comes there and hugs Sirat while she forms a plan and addresses Kairav as her son in front of everyone.

She says that she hadn't married but has a child and the boy's family leaves saying they don't want to marry her.

Sheela and her family leave while Maudi gets chest pain and falls to the chair.

Sirat gives her medicine amd kicks Kairav out of her house where the ward boy takes him away.

Maudi asks Sirat who was that boy to which Sirat replies that she doesn't know but he saved her from getting married.

Maudi and Sirat argue in an emotional talk while elsewhere, Roya sees the box having Naira's picture and asks Kartik why it is in a box.

Kartik closes the box while Roya tells him that he should not hide away the good memories but should treasure it.

Sirat is cooking while Maudi asks her why the kid was calling her mother and she responds that she doesn't know.

Maudi tells her to talk to the kid and Sirat decides to call the hostel.

She calls the hostel and tells Kairav that he might have a misunderstanding and that she is not his mother after which she cuts the call.

She thinks that his mother left him while Kairav faints.

Kartik gets a call from the school and he leaves for the hostel.

© Copyright tellybest.com, 2020, 2021. All Rights Reserved. Unauthorized use and/or duplication of any material from tellybest.com without written permission is strictly prohibited.
Cached Saved on: Friday 16th of April 2021 11:01:56 PM