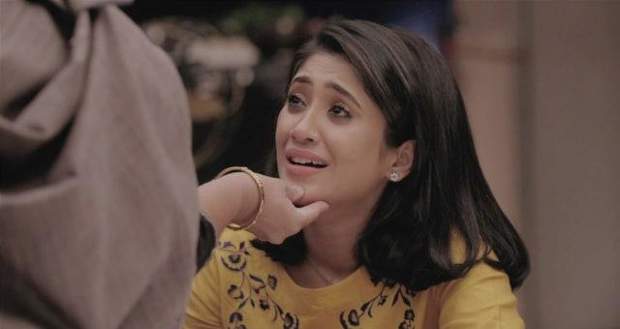 Sirat sees that Kairav is uncomfortable talking to her. She asks Kairav why is he upset.

Kairav tells her not to leave him and go. He tells Sirat that she is the best and wants her always to be with him.

Meanwhile, Suhasini and Sirat's mother both plan a drama to bring Kartik and Sirat together.

Kartik comes to take Kairav home as he slept with Sirat. He goes to the outhouse and gets emotional looking at Kairav and Sirat sleeping together.

Kartik sees the packed bags and tells Sirat to ask him for help if she needs any. He tells her that he will always support her in every way that he can.

Kartik asks Sirat's mother about what is her wish. She replies that she wants Kartik to marry Sirat.

Sirat and Kartik both look at each other shockingly.

Upcoming YRKKH episode (tomorrow) update: Sirat is in dilemma while Kartik tells her not to take the marriage decision hurriedly.

© Copyright tellybest.com, 2020, 2021. All Rights Reserved. Unauthorized use and/or duplication of any material from tellybest.com without written permission is strictly prohibited.
Cached Saved on: Sunday 25th of July 2021 03:45:58 PM