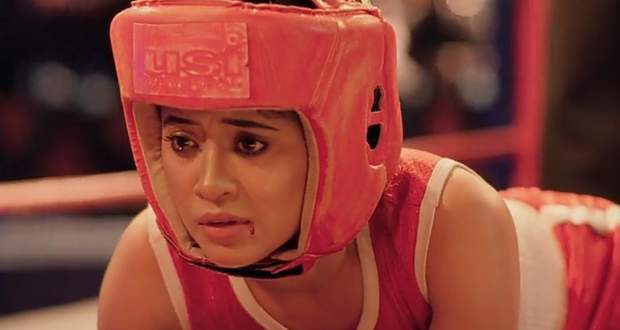 Today's Yeh Rishta Kya Kehlata Hai (YRKKH) 30 January 2021 episode starts with Sirat again standing up after getting hit and fighting with her opponent while the audience cheers for her.

The second round starts while Kairav sees her and goes into the ring.

Sirat is about to knock out the girl while Kairav stops her and sticks to her hand.

The officials tell Sirat to get out of the ring as the match won't continue while she keeps telling them that the kid is not hers.

However, Mukesh tells the officials that the kid is Sirat's while Kairav agrees due to which Sirat gets disqualified.

Sirat keeps telling the officials that the kid is not hers and begs them to recontinue the match which Mukesh speaks against her.

The official disqualifies Sirat and makes the opponent winner while Kartik searches for Kairav at the boxing academy.

Kairav goes after Sirat who gets furious at him and shouts at him and breaks down saying he broke her dream.

Kartik goes to Kairav and consoles him while Dushman tries to pacify Sirat.

Kairav falls unconscious and his school coach tells Kartik about the girl getting disqualified because of Kairav but Kartik berates him and takes Kairav away.

Elsewhere, Sirat cries while Dushman tries to console and take her back home on the bike.

However, he is about to get into an accident but Kartik's car but steadies the bike and apologises to him and goes.

© Copyright tellybest.com, 2020, 2021. All Rights Reserved. Unauthorized use and/or duplication of any material from tellybest.com without written permission is strictly prohibited.
Cached Saved on: Sunday 9th of May 2021 10:22:24 PM