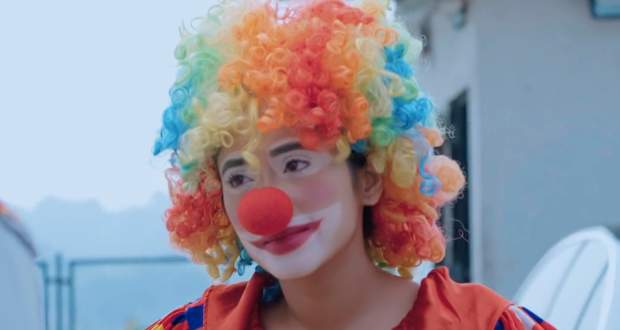 Today's Yeh Rishta Kya Kehlata Hai (YRKKH) 4 December 2020 episode starts with Kartik surprising Kairav with a jungle theme party. Kairav gets impressed while Kartik has got the idea from Naira.

He sees Riddhima and Kairav dancing and imagines Naira. Riddhima wishes to cut the cake while Kartik wants to wait for Naira.

Riddhima thinks it is not a good idea for Kairav to see Naira while Kartik doesn’t want to get into the relationship of a mother and son.

Riddhima knows the pain of being away from your child on his birthday. Meanwhile, Kairav imagines Naira and misses her at the party.

Naira takes the avatar of a clown and enters the building. Elsewhere, Suhasini wants to light oil lamps for Kartik and Kairav.

Surekha is not happy with doing Pooja for Kartik and Naira while Gayu also thinks the family doesn’t care about Vansh.

Kairav is about to fall off the stool when Naira as a clown catches her. Riddhima thinks Naira shouldn’t come in front of Kairav all of a sudden.

Kartik states no one understands Kairav more than his mother, Naira. Naira dances and shows magic to Kairav and others.

Kairav enjoys a lot Naira while in the middle Naira’s nose falls down. She gets scared of getting exposed while Kairav is unable to see because of fog on his spectacles.

Naira is about to leave but Kairav stops her. Kartik also tries to convince Naira to stay with them.

© Copyright tellybest.com, 2020, 2021. All Rights Reserved. Unauthorized use and/or duplication of any material from tellybest.com without written permission is strictly prohibited.
Cached Saved on: Friday 22nd of January 2021 08:24:26 PMCached Disp on: Tuesday 26th of January 2021 01:53:55 PM