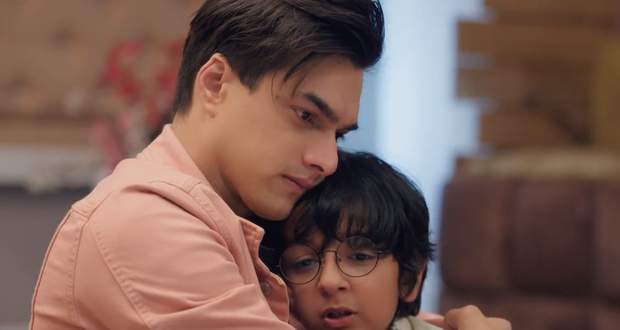 Kartik and Kairav enter the home in a very sad mood while Manish receives Kairav and apologizes to him for sending him to the hostel.
Vansh hugs Kairav, cleans his specs while Kairav says he doesn't have any sweet to give back to him. Vansh says he doesn't expect anything today.
Suwarna tells Kairav to have a meal and she has prepared his favourite food today.
Manish gets worried to see Kartik upset and console him back.
Kairav goes to meet Akshu who is held by Rhea while Rhea greets Kairav.
Kartik thinks about Sirat that no one having the same face as Naira could match the qualities of her Naira.
Kartik apologizes to Kairav that he didn't trust him but the girl he has seen is not his mother, his mother is with the angels, she has become a star.
Kartik makes Kairav realize that his mother cannot come back and they both have to accept this truth.
Kartik wants to live with the memories of Naira and want no one else to replace her.
Meanwhile, Kartik thinks about Akshu that how can he forget his daughter and he hasn't held her yet in his arms.
Further, Riya comes to Kartik's rooms to give Akshu back to him and says that she will be there whenever he needs him as a friend.
On the other hand, Maudi and Sirat are eating food when Sheila comes and shows her photo with a guy and enquires about him.
Sirat bursts up at Sheila and says that guy hugged her as if he has an old relation with her. Sirat tears up the photo and tells Sheila to leave the house.
Sirat is punching Kartik in her dreams and she gets her friend's message to call him back
Sirat's friend informs her that there is an open match in Udaipur and her destiny will change if she will go up to the next level.
Sirat becomes excited to go to Udaipur and prove herself while Kartik wants to forget everything that happened at Jaisalmer.