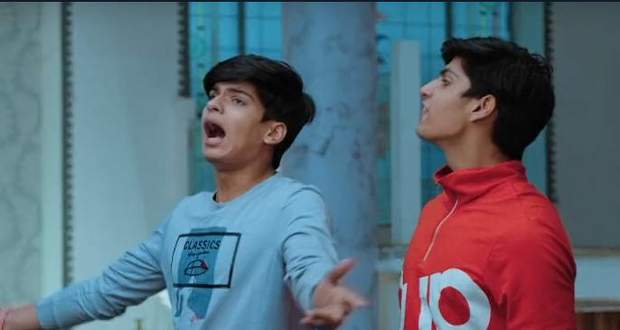 At the Goenka house, Suhasini praises the kids for making a cake while Naksh calls Kartik but doesn't get a response.

Kartik tells Naira that he wants to reveal to the family that they are living separately but Naira refuses to it.

Gayu taunts them saying Kartik won't pick up the call as they are having fun there.

At the same time, Naksh gets a call from Kairav. Naira says that she has a plan and shows the party to the Goenka's.

Kairav sees the cake and thinks that Naira hates him as she didn't even call him to wish him a happy birthday.

Riddhima brings a jelly cake in front of him. He questions that who made the jelly cake, while Kartik and Naira lie that Riddhima brought it for him.

Kairav's friend asks him about his mother not being at the birthday party and he replies that she is in Udaipur.

People ask him about his mother and he replies with a smile that she is a great dance teacher which makes Kartik and Naira happy.

Meanwhile, Luv and Kush make their entry in the Goenka house by riding on a motorcycle.

Luv-Kush asks for Naira and Kartik which hurts Surekha as they didn't even greet her. They see Vansh on a wheelchair and questions elders about it.

Elsewhere, Naira thanks Riddhima for bringing a change in Kairav after which she and Kartik spend time together.

Upcoming YRKKH episode update: Kairav to be shocked to find Naira with Kartik.