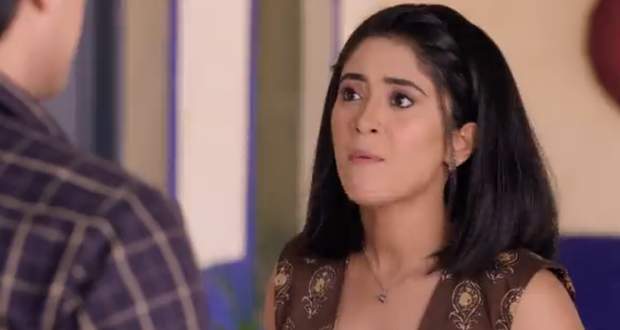 Today's Yeh Rishta Kya Kehlata Hai (YRKKH) 5 February 2021 episode starts with Manish asking Kairav what happened at Jaisalmer that Kartik is not talking to anyone properly.

Kairav replied that they stopped at a certain place in Jaisalmer and papa might have got a fever. Manish thinks that whether it was fever or was he nervous.

Sirat is thinking about the guy who hugged him while running in the park. Sirat tells his friend it was he who hugged her, if she would have done so Sheila would have cut her hair without scissors.

Sirat gets worried about Maudi that after she'll go to Udaipur for a match. Sirat's friend tells her not to worry he'll take care of Maudi.

Rhea asks Suwarna about the Kachori recipe but Gayu says that no one can make Kachori the same as that of Naira for Kartik and his children.

Surekha motivates Rhea that at least she can try and Rhea brings Kachori for Kartik and Kairav that is eaten by Vansh.

Surekha gets hope that Rhea can definitely replace Naira and she cannot stop trying.

Meanwhile, Sirat packs her bag for Udaipur and throws it outside so that Maudi cannot see it, which is seen by Sonu.

Sirat slips her tongue about the match in front of Maudi, to which Sirat says that dreams are seen by the eyes and realised in the field.

Sirat is determined that she will bring a medal and hang at that particular nail to which Maudi inspires her.

Sirat is about to leave the house when Mukesh comes and humiliates her and says that her medal needs to be replaced by Mangal Sutra soon otherwise her age of marriage will pass.