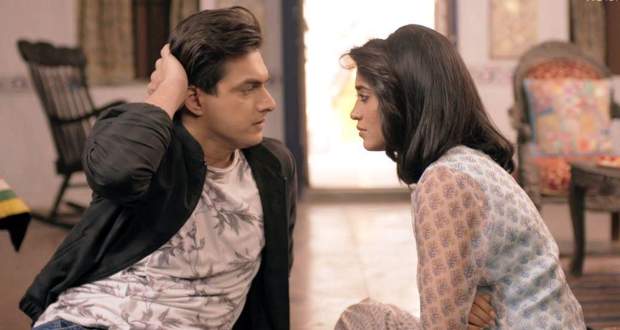 He talks to himself that she cannot be Naira as only her face matches her not behaviour.

But his conscience tells him to confirm and go to Jaisalmer to know who she is if she is not Niara.

On the other side, Sirat touches her Maudi's feet and goes for Udaipur with her friend while Mukesh and Sheila see her going.

Sheila thinks that she might have gone to meet the same guy in the photo who hugged him.

Kartik reaches Jaisalmer and sees Sirat coming from the other side by cycle.

Sirat pleads to the chemist to give her medicine for Mauri which he has given her before.

The chemist refuses to give Sirat medicine as she hasn't paid for last time as well but she requests that she will definitely pay.

He threatens that he will come to her house to which Sirat accepts and even gives him her address.

Meanwhile, Kairav is talking to Krish and Vansh that his mother might be on some secret mission and his father might have gone in the morning itself to meet her.

Manish overhears their conversation that there must be some similarities between that girl and Naira.

Sirat recalls while crying that it is good that she didn't leave for Udaipur as Maudi fell down on the floor due to the sickness as she was about to go.

Kartik comes to Sirat's house searching for her while he is stuck hard on his back and he falls unconscious.

Kartik sees Sirat when he gets up and she asks him if punches weren’t enough for him on the other day that he dares to come to her home while Kartik is shocked.

Kartik keeps on staring at Sirat and she asks him if he considered himself Shahrukh Khan.

© Copyright tellybest.com, 2020, 2021. All Rights Reserved. Unauthorized use and/or duplication of any material from tellybest.com without written permission is strictly prohibited.
Cached Saved on: Sunday 9th of May 2021 04:03:50 AM