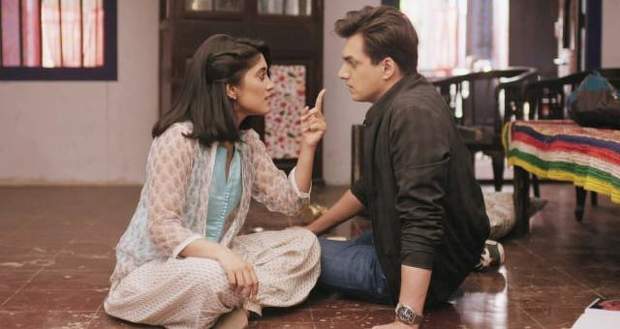 Today's Yeh Rishta Kya Kehlata Hai (YRKKH) 8 February 2021 episode starts with Sirat about to punch Kartik again to keep on staring at her while Maudi comes and says that he is the same person who dropped her that night.

Sirat apologizes and helps him to get up but Kartik faints again. Kartik dreams of Naira but sees Sirat punching him.

When Kartik gets up again, Sirat brings Haldi’s milk for him to drink.

Maudi asks Kartik if they need to bring a doctor but Kartik says that no he wants to go to his home.

Meanwhile, Manish calls Kartik and gets worried that where could he go that his phone is unreachable.

Vansh tells Manish to play with them to which Rhea says family time but she thinks that who wants to have fun with family, she just needs Kartik’s attention.

Surekha tells Suwarna to marry Kartik with Riya but Suwarna says that he needs more time for marriage but Suwarna misunderstands her that Rhea is her niece so that's why she is saying so.

Suwarna tells Surekha that Suhasini is about to come home to which Riya thinks that she will impress her.

Further, Kartik asks Sirat about the washroom to which Sirat thinks that she is helping Kartik because of Maudi otherwise she would have thrown him outside his house.

Kartik asks Sirat about facewash as he is allergic to soap, to which Sirat says they have only soap with them.

Kartik wonders that water not coming from the tap to which Sirat tells him that they kept a bucket of water not for swimming as water comes at only fixed timings.

Sirat thinks that he behaves as if he has come from a different planet.

Kartik is about to leave but stares at Sirat again and thinks that her face only matches with Naira but not her behavior.

Kartik apologizes to Sirat for disturbing her. Sirat asks him that why he has come to her home, to which Kartik says by mistake.

Sirat tells Kartik that the mistake doesn't happen again and again. Then, Kartik show her picture of Kairav to which Sirat becomes very angry and says he is only responsible for the disqualification and spoiling her career

Kartik reminds her that she is talking about his son but Sirat says that you don't know how to handle your child and why he called her his mother. Kartik thinks about Naira.

© Copyright tellybest.com, 2020, 2021. All Rights Reserved. Unauthorized use and/or duplication of any material from tellybest.com without written permission is strictly prohibited.
Cached Saved on: Friday 19th of February 2021 02:02:42 AMCached Disp on: Monday 1st of March 2021 12:29:24 AM