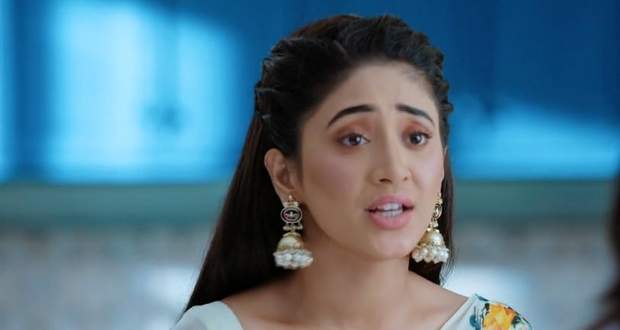 Kartik greets Riddhima and Kairav and the topic of Aai comes up while Naira hides behind the stairs.

Kartik reveals that she is a lady living upstairs who sends yummy food for Kairav every day.

Later, Kartik puts him to bed and tells Naira that he ate with Riddhima at the art fair.

Riddhima comes there and Naira starts rebuking her for feeding Kairav junk food.

Riddhima feels hurt by her words and tells her that she will back out of Kairav's therapy if Naira can treat him.

Riddhima gives them a family drawing that Kartik made at the art fair and leaves.

Naira feels guilty for making Riddhima feel bad and Kartik tries to cheer her up.

Meanwhile, Riddhima breaks down seeing some pictures and keeps apologizing to herself.

Elsewhere, Luv-Kush convinces Vansh to talk to Kairav and calls him.

Vansh joyfully talks to him but suddenly cuts the call when he sees Gayu coming.

At the same time, Kartik-Naira gets worried when they see Riddhima with luggage and start convincing her to not leave Mumbai.

Riddhima surprises them with the news that she's coming to live in the same building as them for better therapy for Kairav which makes Naira feel uneasy.

While unpacking, Riddhima feels emotional remembering her moments with Kairav.