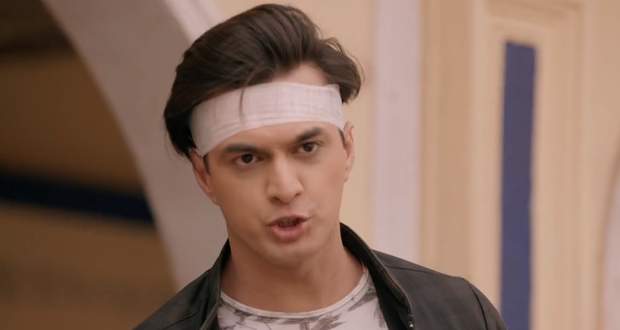 Today's Yeh Rishta Kya Kehlata Hai (YRKKH) 9 February 2021 episode starts with Sirat asking Kartik about where is his wife but Maudi interrupts Sirat that stop asking him so many questions.

Kartik apologizes to Maudi, Sirat for bothering them and leaves.

Kartik gets a call from his father that his grandmother is coming home.

Mukesh comes along with the buyers to sell Maudi's home and tells Maudi to sell her home so that she can marry Sirat as well with that money.

Mukesh asks Maudi that until when she will remain in this ruined home, he is saying that for her betterment only

Buyers tell Maudi to give them the home otherwise they will grab it from her next time.

Mukesh taunts Maudi that Sirat’s character is not also good as she was about to run away with a boy at night.

Sirat catches hold of Mukesh's collar after listening to this and says how dare he say such a thing about her.

Meanwhile, Kartik’s attention gets averted due to the noise of several people at Sirat’s home.

Mukesh throws Sirat at the balcony’s pillar to which Sirat gets hurt on the head.

Kartik hits Mukesh with his feet, to which Mukesh falls. Mukesh wonders who can come and interrupt him.

Kartik asks Mukesh if he knows how to talk with a girl and behave with ladies while buyers leave telling Mukesh to call them only when he is done with his house matters.

Kartik threatens Mukesh to call the police if he doesn't leave, to which Sheila tells Mukesh that she doesn't want the police to come as Mukesh has a boxing match the next day.

Kartik gets worried about Maudi and calls his lawyer to help a family at Jaisalmer. Kartik gives Maudi the lawyer's card and they can call him anytime if they need.

Maudi tells Sirat that she has felt the need for a male in the house after so many years but Sirat says that they don't need anyone else as she and Maudi are enough for each other.

On the other hand, Surekha is amazed at why Suhasini is coming home as when she talked to her a few days back and she was unwilling to come.

Suhasini enters the home and tells Surekha why she needs to come because it was Kairav who called her, told her while crying that he has seen his mother in the hostel.

Surekha, Suwarna, and Rhea touch the feet of Suhasini but Suhasini wonders about Riya that who she is and Surekha tells her that she is her niece.

Suhasini scolds everyone that they cannot even handle a child and asks about Kartik.

Manish tells Suhasini that he must have gone to find a girl that Kairav was talking about.

Suhasini wonders about they let Kartik go alone and if that girl’s face resembles Naira even a bit then what will be the condition of Kartik.

Rhea makes favourite food of Suhasini. Suhasini informs Rhea that she eats Satvik and simple food at Ashram, to which Rhea says that she will prepare simple food for her as she desires.

Manish praises Rhea, tells her that she will prepare everyone's favourite food after getting formerly hired at their home, to which Rhea blushes, expresses gratitude to Manish, and Surekha also gets happy.

Further, Sheila tells Mukesh that she will plan in such a manner that everything will be sorted out without much effort.

Kartik is about to leave but he is not able to find his keys and recalls that his keys are at Sirat’s home.

When Kartik goes to Sirat’s house, then Sirat sees Sonu tempering with Kartik’s car tire and Sirat shouts at Sonu.

Sirat tells Kartik to call for a mechanic but the mechanic does not arrive even till night and Kartik have to live at Sirat's house only.

Maudi feeds Kartik with the food and Kartik thinks that he tries to go away from Sirat but destiny is playing games to bring keep him close to Sirat.