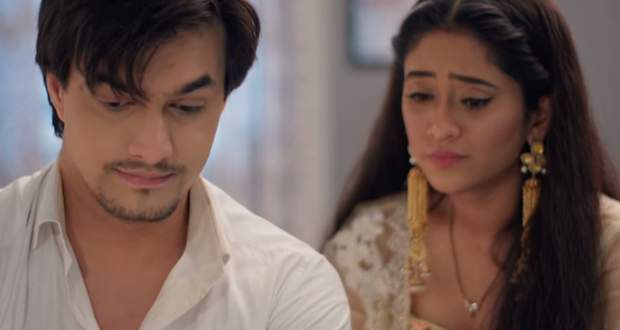 Today's YRKKH 10 Feb episode starts with Kartik getting angry at the inspector for not solving the case. Luv and Kush decide to leave the house while Naira thinks Trisha wanted to tell about Luv and Kush.

Kartik gets upset with Naira’s allegations and asks her to take rest. Meanwhile, Kairav overhears Luv and Kush’s conversation about saving themselves.

They decide to get the phone out but find Kairav overhearing them. Luv again gets angry at Kairav but later consoles Kairav and takes a promise from him to not tell anyone.

Luv threatens Kairav by talking about ghosts. He further suggests that the ghost eats the smallest in the family. Kairav gets really scared and runs to Naira.

Naira and Kartik try to cheer him up by dancing funny. Later, the whole family tries to cheer up Kairav but he stays silent. Kairav reveals that Luv and Kush have told him about the ghost.

Manish suggests finding the ghost from the garden. Kartik asks the gardener to search the mud while he finds a chips packet. The packet contains a box with wishes while the family gets happy to see the care of Luv and Kush for the family.

Later, Kartik and Naira deduce a way to find out the real culprit from Trisha. They learn that letters are three and she also reacts to letter L. Her condition gets out of control and Naira wonder who is the culprit.

Upcoming YRKKH episode update: Luv and Kush decide to leave on their bikes while Naira stops them.