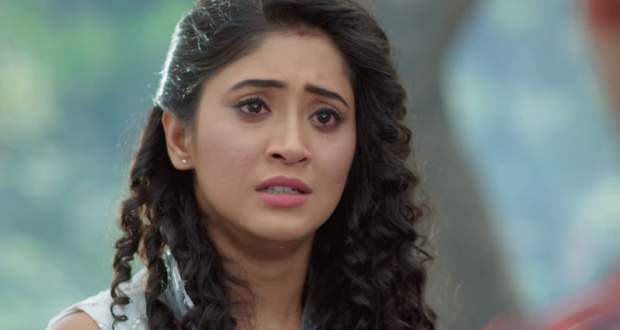 Today's YRKKH 11 Feb episode starts with Luv getting upset as they missed their flight. They also fear of getting exposed while Vansh and Kairav arrive to give them gifts.

They decide to leave early morning by road. Naira is confused about Trisha reacting to letter L and gets suspicious of Luv. Later, Kartik consoles her in not giving up.

Naira sees a bad dream and is scared about Luv being the real culprit. She goes into Luv and Kush’s room and is still suspicious of them being the culprit.

Naira tries to get the truth from Trisha while the Goenka family sees off Luv and Kush. Kartik tries to make Luv and Kush stay to meet Naira while Surekha asks them to leave.

Naira asks Trisha if the culprit’s name starts with L and Trisha blinks in answer. Later, Naira rides on a bike and stops Luv and Kush.

Also, Trisha blinks when Naira asks if it is Luv and Kush. Naira confronts Luv and Kush while they remain silent. She is really upset with them and Kush again gets an asthma attack.

Naira brings Luv and Kush home while everybody gets shocked. She reveals that Trisha was molested by Luv and Kush.

© Copyright tellybest.com, 2018 & 2019. All Rights Reserved. Unauthorized use and/or duplication of this material without written permission from tellybest.com is strictly prohibited.
Cached Saved on: Thursday 13th of February 2020 08:11:59 PMCached Disp on: Friday 21st of February 2020 10:56:48 AM